Fight back against austerity 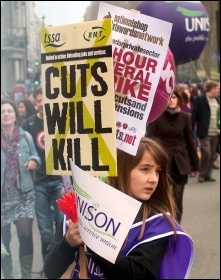 The barrage of government attacks on living standards is relentless, with rich Tory boys leading the charge. Hardly a day goes by without announcements of new measures to make life even harder for some group of workers or young people. One week it is the disabled at Remploy. Next 'undeserving' families. But it is always the working class that is being made to pay for the capitalist crisis.

The Con-Dem coalition is firming up plans for regional pay in the public sector carving up the country into four different (low) pay areas. They also want to loosen the TUPE laws that currently give a modicum of protection to employees transferred out to private companies. Now 'Apprentice' style "you're fired" deregulation is being touted as the only way to enable businesses to grow! Given that this dreadful state faces us after only around 8% of the cuts have been implemented, the big questions are: "Can workers' organisations be just as relentless in defending us from this onslaught? Is the Trades Union Congress capable of marshalling all our forces to halt the bosses' greed? What is it that trade unionists on the ground have got to do to turn the tide and stop these cuts?"

These, and other questions, will be at the forefront of the conference of the National Shop Stewards Network when hundreds of workers and young people from across the country will be gathering in London on 9 June (see advert below).

They will take stock of the battle so far. They will make plans about how trade unionists can be the driving force that can help forge a mighty roadblock and stop this millionaire Con-Dem juggernaut.

Five years ago Greek workers experienced public spending cuts similar to those being implemented by the Con-Dem government today. Many believed, and hoped, such cutbacks would be a temporary blip in the economic cycle. Things would get better soon, wouldn't they? Now they are on the verge of destitution.

If we in Britain put up a less than serious fight now against Cameron, Clegg and their business friends, then Greek conditions will undoubtedly be waiting for us too.

We hope to link up with Greek workers at the NSSN conference to hear first hand of their experiences, and what we can do to forge international solidarity. Also, along with leaders of some of our most militant unions, and rank and file fighters, will be Esenbek from Kazakhstan, where striking oil workers were ruthlessly attacked, and where worker and socialist activists are regularly jailed.

Trade unions are the organisations of the "99%". The NSSN was initiated by the RMT transport union to help revitalise trade unions from the bottom up.

Come to the 9 June conference