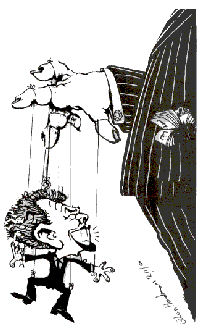 This week the Leveson inquiry called the godfather of Rupert Murdoch's daughter to give testimony. In the stand sat Tony Blair, the man who occupied Downing Street for ten years, the man who ordered the occupation of Iraq, the man who embodied the shadowy relationship between media and government that the inquiry seeks to uncover.

It was a moment when the New Labour politicians who have sought to make political gains from Tory ties to Murdoch, were forced to remember their own party's unashamed courting of the media mogul.

Political pundits, always ready to reach for the easy cliché, were quick to fawn over Blair's powers of oratory. "Watch those hands," cried one on twitter, "those won three elections!"

Blair tried to dust off all of his old media management tricks, reaching his rhetorical high point when declaring that the inquiry was a "sensible moment to protect our democratic freedoms."

Blair claimed that he had a "working relationship" with Murdoch as he tried to portray himself as a pragmatic Labour leader, forced to tone down his principles to win over a hostile media.

The irony of Blair's version of history is that in reality he led a government which relied on media spin to such a degree that Lance Price, a former No 10 Press Officer, described Rupert Murdoch as the "24th member of the Cabinet."

From the privatisation of health care to the invasion of Iraq it was a relationship that New Labour depended on.

As Blair returns to be a consultant for JP Morgan, or support the brutal dictatorship in Kazakhstan or 'manage its communications' with the publicity firm Portland, the inquiry turns its attention back to the Tories.

Culture secretary Jeremy Hunt will finally be called to explain his own relationship with the Murdoch empire. This includes the accusation that Hunt was in regular contact with News Corporation lobbyist Fred Michel while presiding over the company's failed bid to take over BSkyB.

The inquiry has already been presented with a cache of emails which reveal that Hunt's special advisor, Adam Smith, gave Michel insider information about the minister's handling of the bid. When called to give evidence last week Michel declared that he and his bosses were confident that the information given to them from Smith represented the views of the minister.

Smith has already been forced to resign, while pressure mounts on Jeremy Hunt to become the first major political casualty of the inquiry.