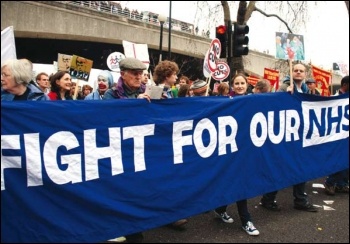 Fight for our NHS, photo Senan   (Click to enlarge)

The National Health Service (NHS) is at a tipping point. Massive government cutbacks - 'efficiency savings' - have led to a haemorrhage of health workers' jobs, A&E and ward closures, and are causing major concerns over patient care.

The implementation of the discredited Health and Social Care Act in England, together with the drive to make all hospitals self-governing Foundation Trusts by 2014, will accelerate privatisation of clinical services.

Already Hinchingbrooke Hospital in Cambridgeshire has become the first privately run NHS hospital in a £1 billion contract with Circle Health. Virgin Care has taken over health care services in Surrey.

Other private vulture companies are licking their lips in anticipation of getting their claws onto the multi-billion pound health budget.

This is hardly surprising given that the private health industry has stuffed £8.3 million into Tory party coffers since 2001.

Potentially standing in the way of this breakup of the NHS as a publicly owned national health service are the healthworkers, organised in the trade unions, and a variety of local community health campaigns.

But to be effective the trade unions must give a lead in fighting back to reverse the privatisation measures and cuts of the Con-Dem and previous Labour governments.

A massive weekend national NHS demo would be a start in boosting the confidence and morale of healthworkers and community campaigners alike.

This could serve as a springboard to an anti-austerity 24-hour general strike called by the trade unions as a warning shot against the government's privatisation and cuts juggernaut.

A partial victory has been won by campaigners fighting to keep Heatherwood hospital near Bracknell, Berkshire, open, writes Terry Pearce, the chair of Defend Our Community Services.

He adds: "While there are more questions than answers, by mobilising public opinion we have forced the local NHS bosses to rethink their plan to close the hospital.

"Twelve months ago it was planned to close the hospital and sell the land off. With 20,000 names on our petition and following a series of marches, meetings, lobbies, etc, we have won round one.

"The fight continues to ensure that we have a NHS hospital on the site, with no PFI, privatisation or part privatisation."

'Revolt' in the Tories' back yard

Over 2,000 people turned out in Northallerton for a march and rally, on Saturday 26 May, to protest about the proposed reduction of children's and maternity services at the Friarage Hospital. Overnight paediatric care and complicated births would be transferred to the James Cook Hospital in Middlesbrough some 22 miles away.

The rally marked the culmination of many months of consultations where hundreds of people turned up to meetings in village halls to voice their concerns to the South Tees NHS Trust.

The rally was addressed by Tory MP William Hague, who was well off message. It is likely that his intervention will result in some fudge where the Friarage will retain the bulk of the services under threat. The South Tees Trust will no doubt instead make cuts in less controversial areas.

Northallerton is one of the most affluent towns in England and at the heart of Tory North Yorkshire. The campaign to keep services at the Friarage gained wide support. However, it was tightly controlled by Tory and 'Independent' councillors who have kept it 'non political'.

The Socialist Party was able to inject some politics into the event. Hundreds of 'Hands Off Our NHS' leaflets were distributed at the rally.

These leaflets pointed out the transfer of some maternity and children's services from the Friarage was not unique to Northallerton and that the concentration of specialist services to larger hospitals was taking place at many places across the country.

The main motive behind this is the £20 billion of 'efficiency savings' imposed on the NHS by the Tory government.

The leaflets were well received. Especially from one elderly lady who asked for a bundle to give to her friends. "Yes you are right", she said. "I told them all it was to do with money!"

For the full versions of these articles, see:

Revolt in the Tories' back yard

And Save Heatherwood hospital

Revolt in the Tories' back yard