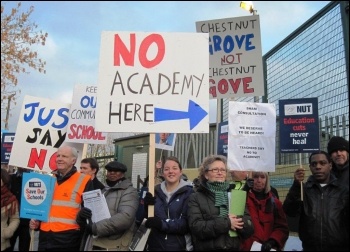 16 February 2011 teachers at Chestnut Grove School in Balham, Wandsworth, south London, went on strike to show their opposition to the school becoming an academy.   (Click to enlarge)

"The transfer from local authority control was announced a month ago. Consultation with the union, staff, parents and students only happened after the decision had already been taken to transfer the school to Edison academy trust.

"Edison was booted out of schools in the United States for costing more than the public school system, despite claiming they would be cheaper and still make a profit.

"They also claimed that they would improve educational standards, but failed to do so. Yet this profit-motivated provider is good enough for Tory education secretary Michael Gove.

"If this really was a consultation period, why haven't the governors met with the union before the strike took place? The aim of the strike is for the governors to withdraw the application and to consider other options; they are not being forced into this.

"The union will gauge the support of its members before deciding the next step, but so far the membership have been prepared to stand up to privatisations."

There is no evidence that becoming an Academy can improve schools but there is widespread belief that Michael Gove wants to privatise all schools, use Academies to attack pay and conditions for staff and allow Academy providers to make profits out of schools.

The fight must continue, not just for the staff of Kingsthorpe College but for all of us, not just to defend our schools and our NHS but all public services against cuts and privatisation which will reduce services and working conditions for those employed in them.

We can't afford to lose this fight. We must stand united to defeat this government and its friends who want to make even more profit, whilst making us pay for their crisis!

On 24 May, National Union of Teachers (NUT) members took determined and solid strike action against cuts to teachers' and lecturers' jobs at Sussex Downs College.

There was no evidence that any classes ran at Park College, the Eastbourne campus organised by the NUT. Public support was very much on display. One driver pulled over to hand out boxes of ice lollies bought for the pickets!

No Park members now face compulsory redundancy, but while some still face reductions in hours action will continue.

Sussex Downs College is making a 10% reduction in staffing as funding cuts and the scrapping of EMA have lead to fewer students and less money.

This means fewer teachers teaching more hours while students get less lesson time. The NUT, supported by Nasuwt, has made it clear that these cuts will be fought.

The only disappointment was that the strike was not across every one of the college's campuses. We hope the strike can give UCU members, who organise the other campuses, confidence to join the action.

The NUT and Nasuwt teaching unions, that together represent 85% of teachers in England and Wales, made a declaration on 28 May over joint action against the Con-Dem government's attacks on education.

An NUT ballot to widen action to include other key issues as well as pensions opens on 25 June.

Union members can help make sure that the full potential of the declaration is realised by coming to the Local Associations for National Action Conference: Saturday 16 June,

For the full versions of the above articles, see:

No to Kingsthorpe Academy!

And Strike at Sussex Downs College