From The Socialist newspaper, 4 July 2012

Jail the banksters! Nationalise the banks under popular democratic control 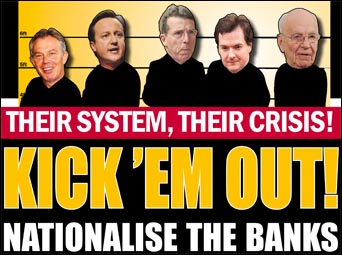 Their system, their crisis: kick 'em out! nationalise the banks , photo Socialist Party

In 2008 the Socialist warned that: "the calls for regulation are like asking the bank robbers' gangs to keep a check on the bank robbers. What is urgently needed is popular control of the major banks and finance houses, not 'oversight' by unelected quangos and elected capitalist politicians, whose allegiance is to big business." Now the bank robbery has been exposed yet again.

Then, when Britain's banking system went into meltdown, the government spent £109 billion bailing it out. Since then, in one of the greatest con tricks in history, we've been told that it was excessive spending by the public sector and by working class people that was responsible for the crisis.

The only solution, we were told, was for us to accept horrendous cuts in our pay, living standards, and public services. So far, only 15% of the cuts have been carried out.

But this has already resulted in 350,000 public sector workers losing their jobs, huge attacks on public sector pensions, and tens of thousands of the most vulnerable in society being threatened with losing the pittance of benefits they were previously entitled to. As a result suicide is on the increase. Last weekend one desperate man in Birmingham tragically set himself on fire after his benefits were stopped.

Meanwhile, the bankers are still laughing all the way to the bank. The speculators' and banksters' bonuses have gone back to pre-crisis levels, not that they slipped so low. From day one the Con-Dem government has set out to give every assistance to its friends in the City of London. The toothless Vickers' commission, set up to investigate the banks, made only the most minimal proposals, with even these not being introduced until 2019.

Cameron's 'veto' on the Euro treaty last December was in part an attempt to protect the City of London from even minimal regulation. No wonder. Hedge funds, financiers, and private equity provided 27% of Tory party funding in 2011. Overall the 'Square Mile' now provides a majority, 51%, of Tory party funding. The Tory party is one of the oldest and historically one of the most successful capitalist parties in the world. That it is now funded by the spivs in the City reflects the reality of British capitalism in the 21st century: where the shots are called not by manufacturing industry - so-called 'productive capitalism' - but by the short-term gamblers of the financial markets.

Since the banks were bailed out they have singularly failed to carry out the tasks that we were told made them so indispensable. Mortgage lending is down 40% from pre-crisis levels, with banks demanding a 25% deposit. As a result a generation is condemned to short-term, insecure and expensive private lets.

Banks are currently refusing credit to over 40% of small and medium-sized businesses. And, as has been revealed, many of those who were given loans were also mis-sold expensive and risky financial instruments as a condition of the loan. Even the most basic task of managing individuals' bank accounts has proved beyond NatWest/RBS. Customers of its subsidiary Ulster Bank are still unable to access their bank accounts two weeks after the recent 'computer glitch' began.

And now this latest scandal lays bare how the banks have been fiddling to maximise their profits. The Libor rate (London interbank lending interest rate) is set by 16 banks daily submitting numbers for the cost of their borrowing. The middle eight figures are then used to set the rate. Barclays lied about their numbers for their own advantage.

There are vast sums of money involved in gambling on interest rates. The Bank of International Settlements estimates that total interest rate derivatives contracts totalled $554 trillion (£357 trillion) in the first half of 2011, many times larger than the world's entire output!

The fraud had a direct effect on the lives of millions of people. For example, the Libor rate is used to calculate the pricing of mortgages, credit card interest rates, savings accounts and more. Such is the scale of the scandal that Bob Diamond, CEO of Barclays, has finally been forced to resign on 3 July. But there is life after death! The chairman of Barclays, Marcus Aegis who resigned the day before, has now come back!

This farcical reshuffling of the chairs on Barclays' decks solves nothing. The bankers responsible for this fraud should be jailed. Every one of the financial spivs and speculators should be sacked - with not a penny in pay-offs. However this is not just a question of individuals.

Over the coming days it is likely to be revealed that many more banks were involved in fiddling the Libor rate. It seems clear that the Bank of England knew that this was taking place. Diamond's resignation is an attempt to prevent the full dirty mess being revealed.

Labour leader Ed Miliband has rightly attacked the government for failing to set up a public inquiry, instead appointing a few MPs to carry out what will undoubtedly be a whitewash.

We demand a public inquiry in the real sense of the word. That is an inquiry where all of the banks' books are opened to an investigation team made up of trade union representatives, representatives of ordinary mortgage holders, pensioners, and young people.

However, New Labour has no solution to this crisis and is, along with the Con-Dems, culpable for it. In government New Labour continued the 'light touch' - ie non-existent - regulation of the financial system that had begun under Thatcher. In 2008 New Labour bailed out the banks while leaving the same banksters in charge. Since then they have colluded in the lie that it is public services and public sector workers that are responsible for the economic crisis.

The Socialist is clear - the banking system should be nationalised under democratic popular control. Only on this basis would it be possible to get rid of the spivs and speculators that are holding working class people to ransom. A genuinely nationalised banking sector would be run for the benefit of the majority, rather than for the super-rich.

Those struggling to pay their mortgage would have it converted to an affordable rent; small businesses could get cheap loans, and public works such as a massive house-building programme could be cheaply financed.

The need to build a mass party of working people which stands for this demand as part of a broader socialist programme has never been clearer. As the rotten heart of Britain's banking system is revealed to millions many will be drawing this conclusion.

How would socialism be different?

The banking crisis is a crisis of the capitalist system. Capitalism means private ownership of the big corporations and banks that dominate the economy and the rich getting richer off of our hard work. And it is a system in crisis. In one year, in 2008, $50 trillion of wealth was destroyed worldwide through economic crisis.

Nationalisation of the banking and finance sector, and the big corporations, could allow an elected and accountable socialist government to begin planning production for need and not for profit. Everyone could have a decent job with a living wage, high quality housing and free education.

Why a new mass workers' party?

Working class people are fighting back against the effects of capitalist crisis - taking strike action to defend working conditions and public services.

But when it comes to elections they have no party that represents them. The Labour Party no longer speaks for working class people.

Leader Ed Miliband has said he supports the government's austerity measures and says a future Labour government would not reverse one spending cut! We think a new mass party of the working class is needed.

The Socialist Party, alongside Bob Crow of the RMT transport union and other militant trade unionists, plays a key role in the Trade Unionist and Socialist Coalition (TUSC) which is an important step toward such a party.

What can you do?

Our members are people like you: workers, young people, students and pensioners and all those suffering under austerity - not gaining from it. We fight for the interests of the working class - the vast majority in society - we fight for socialism.

And we are affiliated to the Committee for a Workers' International (CWI) which organises in more than 45 countries worldwide. We stand in solidarity with the workers and oppressed of the planet in the struggle for a socialist world.

What we stand for

Get the Socialist every week: www.socialistparty.org.uk/subscribe

The time for "remorse and apology" by banks over their role in the financial crisis should end - Barclays ex-boss Bob Diamond, 2011...

"Dude. I owe you big time! Come over one day after work and I'm opening a bottle of Bollinger" - Barclays banker involved in Libor rate-setting...

Jail the banksters! Nationalise the banks under popular democratic control

London buses: "This is why we're in the union"