Link to this page: https://www.socialistparty.org.uk/articles/14985 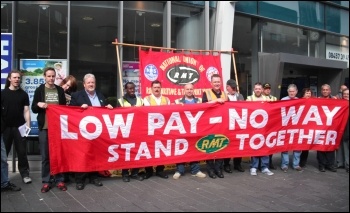 Churchill cleaners working on Tyne & Wear Metro have taken a further 48 hours of strike action against stingy bosses in a highly profitable company who had the audacity to describe a zero increase pay offer as generous.

RMT regional organiser Micky Thompson told the Socialist: "We are frustrated that there is no engagement from the company.

"They are not prepared to respond despite supporting resolutions from the TUC and an Early Day Motion being put to parliament".

Micky went on to say that Churchill bosses have adopted the position of an "ostrich burying its head in the sand - hoping the problem will go away".

However, it is clear from the picket line and protest that the cleaners are determined both to fight for an improvement in their terms and conditions, and to continue the struggle for the reinstatement of sacked RMT member William Etchells.

Micky finished by saying: "Nexus, DB Regio and the Integrated Transport Authority could all intervene and force Churchill Contract Services back around the negotiation table".

This version of this article was first posted on the Socialist Party website on 6 August 2012 and may vary slightly from the version subsequently printed in The Socialist.