From The Socialist newspaper, 26 September 2012

When the Shankill and the Falls fought together 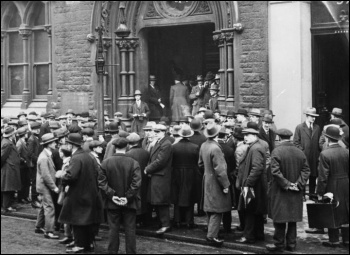 Unemployment in the UK in the 1930s, photo Wikimedia Commons.   (Click to enlarge)

This year marks the 80th anniversary of the heroic Outdoor Relief Strike in Belfast. This battle is an important example of workers' unity that has vital lessons on how sectarianism can be overcome and the Northern Ireland Assembly's austerity defeated today.

On 6 October Youth Fight for Jobs in Northern Ireland will be marking this anniversary with a march up the Shankill and down the Falls Road, Protestant and Catholic areas respectively (see advert below).

These were the heartland of the struggle 80 years ago and today have some of the highest rates of unemployment.

Since its formation, Northern Ireland had been riddled by unemployment - even in the brief economic upswing in the mid-1920s, unemployment never fell below 15%.

The worldwide stock markets crash of 1929 caused further destitution - 37% of the workforce were unemployed by 1932.

In shipbuilding, Belfast's key industry, 73% of workers were out of work. Emigration had provided a release but by 1931, with no jobs both Canada and the USA started to give 'one-way' tickets home.

The Board of Guardians which controlled the distribution of outdoor relief, a miserly form of benefit, was dominated by 'big house' Unionists who saw it as their 'civic duty' to discourage the unemployed from claiming.

This included publicly listing all claimants on gable walls and through personal interviews that probed every detail of their finances and personal life.

Only able-bodied, married men were able to apply, with many workers failing the test because they were undernourished. The only alternative was 'indoor relief', ie the workhouse.

Those 'successful', were made to do 'task works', such as mending roads, for which they received lower payments than those in Britain.

A married man with one child received twelve shillings (60p) compared to thirty-five shillings (£1.75) in Glasgow.

Payment was also made 'in kind', in the form of a chit - a signed credit note - which could be exchanged at only a few Unionist-owned shops - meaning payment couldn't be used for rent.

The Board of Guardians operated the system in a blatantly discriminatory manner against Catholics but also against those in the labour movement.

They were completely out of touch with the unemployeds' plight. At one meeting the chairperson of the Board proposed that, because too many applications were made on one day, they should all be rejected so the Board could go home! 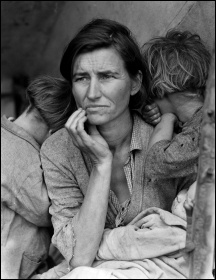 Unemployment in the 1930s depression in the USA. Mother with children., photo Wikimedia Commons   (Click to enlarge)

The months before the Relief Strike saw increased demonstrations of the unemployed. But it was the example set in Birkenhead and Liverpool - where an uprising defeated the hated 'means test' (see the Socialist 656) - that gave confidence to thousands of Belfast's unemployed that mass action could win.

On 30 September 1932, 2,000 people attended a mass meeting called by the Outdoor Relief Workers' Committee, which had been formed by the Revolutionary Workers' Group (RWG).

At the meeting, it was agreed to call a strike around the following key demands: Abolition of task work; Increase in relief payments; No payment in "kind"; Street improvement work to be paid at trade union rates; and outdoor allowances for all single unemployed men and women.

On Monday 3 October, the strike began when 600 relief workers joined the strikes. With 20,000 pickets across Belfast all the schemes were closed down and the strike was 100% solid.

That evening, a crowd of 30,000 marched to Custom House, where a mass meeting was held. Bands which previously played sectarian songs came together and played 'Yes, We Have No Bananas', a current popular song.

The next day thousands marched to the Belfast workhouse, blocking the road. The following day, the same demonstration was stopped by police armoured cars. 114 strikers, however, managed to sign themselves into the workhouse, where they refused to obey orders and danced all night until the police came and arrested them!

In the following nights, there was fierce rioting. The Mayor was forced to offer to increase the amount of relief by 50%.

At a mass meeting, however, the proposal was rejected, the weakness shown by the establishment spurred the workers on with plans to escalate the struggle through a rent strike, a hire purchase or 'tick' strike and general strike.

Plans for another demonstration - with feeder marches from across Belfast - were drawn up for 11 October.

The government banned all demonstrations and enacted the draconian Special Powers Act. At the same time, the workers organised house-to-house collection of money and food, and single men carried out raids on workhouses.

Mass meetings were held which decided to defy the ban and go ahead with the demonstration.

On the 11th, workers came out in their thousands to defy the Stormont government. They were regularly baton-charged by the police but workers set up barricades and resisted throughout the day.

On the Falls, the police moved in with armoured cars and rifles. Bates, the Home Secretary, gave orders that live ammunition be used in Catholic areas in an attempt to whip up sectarianism.

This actually had the opposite effect and created greater unity. When strikers from the Shankill got word of the battle on the Falls, they ran to assist their Catholic comrades.

When the dust had settled, the state had killed one Catholic and one Protestant. When it came to the funerals of these martyrs, 100,000 lined the route.

Despite a government curfew and an attempt to stop the supply of food to areas, the government recognised that it could not defeat a united movement, especially when Belfast Trades Council threatened a general strike.

Struggle against the capitalist system

The strike won an increased rate for married men but only part of the demands had been met. The intervention of the trade union officialdom offered enough weight to have this deal accepted at a mass meeting.

Tom Geehan, a leader of the struggle, addressed the meeting. He said: "What we have achieved gives the direct lie and contradiction to those who said the workers of Belfast could not be united, and would not fight.

"They had seen Protestants and Catholics marching together and, on Tuesday, fighting together."

One of the main demands, not conceded, was relief to single persons. RWG members on the strike committee came in for heavy criticism for ending the strike before winning this and splitting the unemployed movement.

As well as the body originally established by the RWG and a 'moderate' organisation set up by the Trades Council, there developed a body specifically for those single persons left with nothing.

This division allowed the Guardians to announce as early as December that the new agreed rates were maximum rates only and could be reduced as they decided!

Had the Trades Council followed through with their threat of a general strike this could have resulted in a much more decisive victory.

The RWG played an important leadership role throughout. This small band of 50 members committed to anti-sectarian, socialist politics was able to lead a movement of thousands of workers.

However, reflecting the Stalinist policies of the time, they failed to engage in serious work within the trade union movement which could have allowed militants to win the workers' support for more decisive action.

This movement was only the start of an important period of working class struggle and unity. It was followed by a bitter railway workers' strike against wage cuts, which gained massive sympathy from the working class.

While these workers' struggles were taking place, sectarian forces found it hard to find an echo among the working class.

In the context of defeats and a labour movement that was politically unprepared to take on sectarianism, however, the bigots began to regain their base in society. 1935 saw the greatest pogrom since those during the foundation of the Northern Ireland state.

Had the RWG seized upon the opportunities of the early 1930s and orientated itself towards building a base in the trade union movement, a political force could have been built to challenge sectarianism and also the capitalist system in which it is rooted.

Socialists need to draw some pointed lessons from these historical events, but the 1932 strikes reflected a marvellous example where workers and unemployed united in struggle against the system.

For a background on Northern Ireland, including the Peter Hadden archive, see socialistpartyni.net

Teachers: march together, then strike together against austerity

Reasons to join the 20 October demo, reasons to build for a 24-hour strike

Labour Party conference: Can Labour give a lead in the fight against austerity?

Spain: March on Madrid kicks off a hot autumn of struggle

Action needed to save NHS from privatisation

Solidarity with workers sacked from Crossrail

No excuse! Thousands protest against victim blaming on London Slutwalk

Enthusiastic start to the year for Socialist Students

Why Hull council should defy the government's cuts to services

Tameside library closures - "Get used to it" says councillor