From The Socialist newspaper, 17 October 2012

Unions must build the Trade Unionist and Socialist Coalition (TUSC) 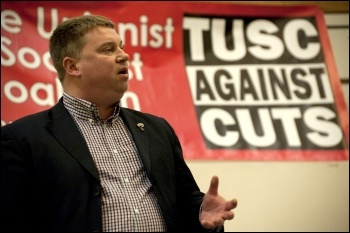 RMT's executive committee took part in the conference on behalf of our union. This year RMT's 2012 annual general meeting adopted a policy to support the development of a new political force that advances the ideas of trade unionism and socialism, to give confidence to workers and help to create a viable political alternative to austerity.

RMT called for TUSC to develop a trade union forum to take our message to working people in trade union branches, shop stewards' committees and throughout the democratic structures of the trade union movement.

TUSC provides a nucleus of a new political force. While TUSC is not a political party and remains a federation of socialist individuals and organisations (including the Socialist Party) along with an increasing number of trade union bodies, the numbers of activists currently involved in TUSC is a fraction of the number needed to stand candidates in every local authority, district council and national elections.

This, however, must be our aim if we are going to offer working class people an alternative to the diet of cuts, outsourcing, privatisation, wage freezes and anti-trade union laws that is supported by the leaders of all the main political parties in Britain.

RMT was 'disaffiliated' in 2003 by the Labour Party that our predecessors in the Amalgamated Society of Railway Servants founded in 1899.

Our expulsion was the outcome of a decision to support socialist candidates standing in Scottish parliamentary elections.

That decision by RMT's special general meeting in Glasgow came about because RMT members were no longer prepared to stomach New Labour's policies of Tube and rail privatisation, labour market flexibility and war. 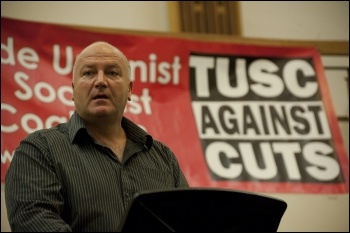 In the last decade RMT has developed a debate through our democratic structures on the glaring absence of working class political representation in Britain today.

RMT continues to work with socialist MPs in Westminster and our parliamentary group, which has now increased to 24 members.

However, the greatest absence in the political armoury of working people today is the absence of an avowed mass party of socialism, able to intervene in every electoral contest and to argue for a political alternative to austerity and neoliberalism.

Such a mass party would pull Labour's policies to the left. Instead of allowing party leaders such as Ed Balls and Ed Miliband to take working class voters for granted by pitching themselves as 'one nation' conservatives, we should be mobilising the millions of working class voters who want some red-blooded socialist solutions to the global capitalist crisis.

RMT is proud to have played a lead role in developing the arguments for an alternative. In 2009 we created the first nationwide electoral platform backed by any national trade union to stand candidates against official Labour candidates in the European elections with the 'No2EU - Yes to Democracy' coalition. 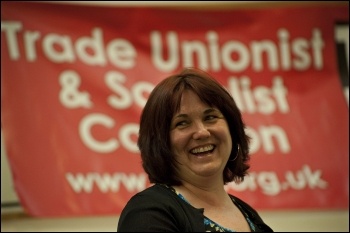 More recently RMT has supported candidates standing under the TUSC banner in local and national elections.

Our AGM this year unanimously approved a resolution for RMT to continue to support TUSC candidates, subject to our rules and the authority of the union's executive.

We are under no illusions that an electoral mass party of socialism is a difficult and arduous process to build, beset by difficulties, not least the financial resources that are required.

Nevertheless, every tax cut for the rich, every pay cut for workers, every attack on the welfare state from the Tories and their Lib Dem lapdogs and every pathetic apology for continuing austerity policies 'more slowly' from the leaders of the Labour Party, underline the need for a socialist alternative.

We call on trade unions representing the millions of workers and their families in Britain today who have been abandoned by Labour to join us in building TUSC as a nucleus of such an alternative.

Manchester Socialist Party became convinced of the need to run a TUSC candidate in the November byelection after watching the Labour Party candidate Lucy Powell turn in a useless performance in a debate at the trades union council.

Labour's selection of a careerist, ex-adviser to Ed Miliband typified everything about its degeneration into a purely capitalist party.

The Labour held constituency has one of the highest unemployment rates in the country. We also have a Labour council cutting and privatising vital services.

The constituency is also home to several major railway stations which will face devastating cuts to jobs if the McNulty report is allowed to be implemented.

TUSC is the only political force with a programme based around putting a real political alternative to the policies of privatisation, wage freezes and endless austerity.

As a PCS union activist I have witnessed first-hand the devastating impact of government spending cuts and wage freezes.

As Miliband and shadow chancellor Ed Balls have made clear, they will continue with the anti-working class policies of the Con-Dems. Labour offers no alternative for our class.

Our campaign in Manchester will be based around workplaces and anti-cuts campaigns and in working class communities.

We will be showing that there is an alternative for working class people to the dead end of Labour.

I am proud to be the TUSC candidate and to be part of rebuilding working class political representation.

It has emerged that Bristol's funding will be cut by an extra £25 million over and above what had been expected.

This should send a shiver down the spine of Bristolians when you consider what cuts have already meant for the city.

They have included the privatisation of home care services and now the closure of eight elderly people's homes and seven daycare centres.

The city's Lib Dem council launched a consultation to try and make ordinary residents take some of the decisions about where cuts should fall.

This was to take some of the heat off themselves for slavishly following the orders of Cameron and Osborne and passing on the government's cuts.

On 15 November people in Bristol will have the chance to have a say on what really matters in the election for the new post of mayor.

Sadly the choice between the main parties is simply about which cuts to make. None of them have opposed the government's austerity agenda or pledged to fight cuts locally.

But there is an alternative. I am standing for Trade Unionists and Socialists Against Cuts to give a voice to ordinary working class people.

Prices are rising but our pay isn't and we're expected to pay for a crisis caused by super-rich bankers while they're still rolling in the cash.

Enough is enough. I am standing on a programme of active opposition to all cuts and will only take the average wage of a worker if elected.

Manchester: For an anti-cuts MP

40 years since Clay Cross council defied the Tory government, this meeting will discuss the lessons for the battle against cuts today

We want a 24-hour general strike!

Unions must build the Trade Unionist and Socialist Coalition (TUSC)

Who was Malcolm X?

Solidarity with Miners in South Africa

US elections: And the winner is... Wall Street!

Hands off our NHS! - Victory in Gloucestershire

Stop the far right from 'uniting' on 27 October

Chase the sharks out of Toon!

Fight back against austerity - support the Socialist Party

New sales of the Socialist in Kenilworth