Link to this page: https://www.socialistparty.org.uk/articles/15621 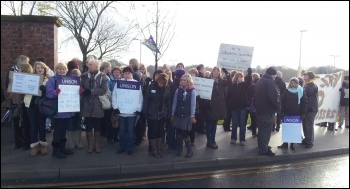 On Thursday 1st November admin and clerical workers at the three hospitals making up the Mid Yorkshire NHS Trust took strike action in defence of pay.

Management at the hospital wish to balance the massive debt from a rip-off PFI deal that built a new hospital at Pinderfields onto the backs of low paid staff by down-banding them from Grade 4 to Grade 3, which will see staff lose between £1,700 and £2,800 a year. They are also threatened with compulsory redundancies.

Many of the staff, which include medical secretaries, receptionists, ward clerks and others, were on strike for the first time.

Newly elected shop steward for medical secretaries, Andrea Busfield, explained: "We've been pushed to the absolute limit with these proposals.

"The Trust is spending hundreds of thousands of pounds on an outside management consultancy agency, whilst wanting to cut our pay by up to 20%".

"The new PFI hospitals have put the trust in massive debt and we're the ones that are paying the cost for that.

"They are reducing staffing levels by such an extent you wonder who's actually going to be there to staff these buildings and provide patient care". 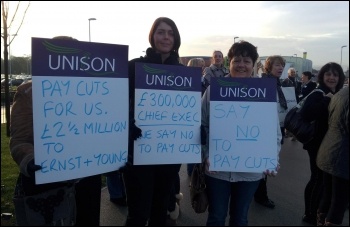 There was a strong turnout on the picket lines, with over 100 across the three sites, and support being brought by several local trade unionists and Socialist Party members at all three sites.

Union reps said that people joined the union that week who were on the picket lines. Others also joined who hadn't at this stage been balloted, who were being asked to cover strikers' jobs and refused to do so.

One person coming out of the hospital described the reception as chaos as high paid managers attempted to cover the jobs, revealing the lies of despised Trust head Stephen Eames "that services were running as normal".

At the Pinderfields site, several current and former patients supported the picket, offering encouragement and one gave a speech telling the strikers not to give in until they force management back.

Local people are just as angry as the staff at the way the Trust has attacked jobs and services. This is also reflected in the 200-strong demonstration by local people in Dewsbury last Saturday as part of an ongoing campaign against plans to downgrade that hospital, and the recent successful campaign to re-open the A&E ward at Pontefract hospital.

After the picket lines, the strikers came together for an impressive rally in the town hall, where Pinderfields striker Andrea, Unison head of health Christina McAnea, Unison branch secretary Adrian O'Malley and Dewsbury striker Dave Byrom spoke, the latter two both being members of the Socialist Party. 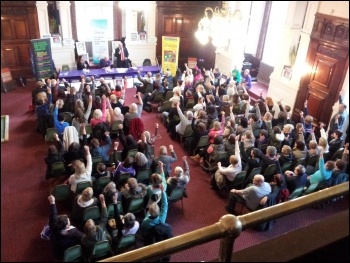 Andrea and Dave gave powerful arguments about the injustice of these attacks on low paid workers and Dave raised the Unison branch's opposition to the PFI deal, and appealed for further support for the Dewsbury campaign which demands that full services are kept at all three sites.

Adrian highlighted how managers had thought that a low paid, predominantly female workforce would be soft targets for the first round of pay cuts.

He commented on the pettiness of local managers who refused strikers access to the public toilets on the site.

He announced that the Unison branch will be looking to ballot further layers of workers in the Trust, as well as taking an indicative vote of the strikers as to their preparedness to take further strike action themselves in the next few weeks - which received a unanimous yes!

Christina McAnea said that she was "pleased to be part of a union where members are prepared to come out to defend their pay and jobs" and stated that "you've got the best branch secretary you could possibly have to fight this battle".

The regional secretary of Unison, Jim Bell, also said: "Adrian is one of the best, most hardworking branch secretaries". 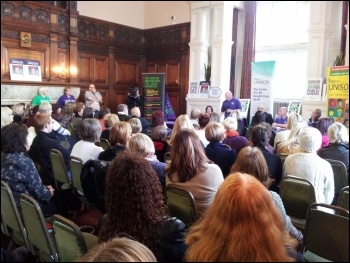 For Christina McAnea, this is a change from her cynical declaration at the time of the 30th November strike last year that it was just a mere "damage limitation exercise".

As the attacks on the NHS have become ever more devastating, the union leaders are being made to regret the policy of inaction and concession bargaining over the previous period which has led to a weakening of many health branches as members have left or become inactive in disgust.

To protect their own positions they are being forced to turn to active branches they have tried to silence in the recent past.

Local Socialist Party members will continue campaigning to oppose attacks to our NHS in local areas where we have played a pivotal role, organising meetings of over 100 in Dewsbury as well as the recent demonstration.

With over 13 copies of the Socialist sold to strikers on the day, as well as tens more earlier in the week, there is a growing interest in not just fighting the cuts, but as the cheers and applause for the call for a one-day general strike during the rally showed, for getting rid of this rotten Con-Dem government and fighting for a socialist alternative. 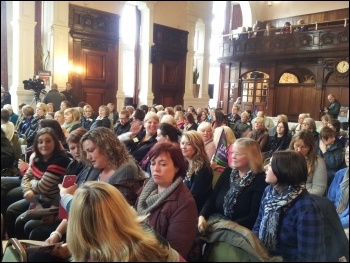