From The Socialist newspaper, 7 November 2012

End the era of 'disaster capitalism' 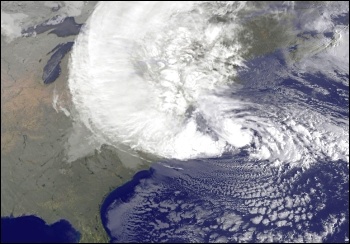 The gigantic Frankenstorm hurricane Sandy has put thousands out of their homes, left millions without power, and claimed more than 100 lives across north eastern USA, photo NASA   (Click to enlarge)

The gigantic 'Frankenstorm' hurricane Sandy has put thousands out of their homes, left millions without power, and claimed more than 100 lives across north eastern USA.

Preliminary estimates of the damage reach up to $50 billion, which would make Sandy the most expensive storm in US history.

While both presidential candidates - Barack Obama and Mitt Romney - avoid any mention of climate change, millions correctly see this hurricane as another dire warning.

Violent and extreme weather is on the rise, and unless we overcome corporate resistance to transforming our energy economy, working people will pay an ever-growing price of death and destruction.

Like Hurricane Katrina, responsibility for this disaster must be clearly placed on the big business politicians and the capitalist system.

In 2005, when Katrina ravaged working class communities in New Orleans, the shockingly slow response was rightly seen as evidence of Bush's total incompetence and, as Kanye West (rapper and film director) put it, that he "does not care about black people."

This time, under the pressure of the neck-and-neck presidential race, Obama's response has been quicker.

Yet a serious look at the Democrats' record tells a different story. In the last two years, Congress has cut primary grants for the Federal Emergency Management Agency (Fema) by 43% (New York Times 27/8/12).

This was justified by the bipartisan drive to reduce the federal deficit. Both parties look to balance the budget through cuts to vital services, but the deficit was caused primarily by the bailouts of Wall Street and auto companies and the wars in Iraq and Afghanistan, which cost taxpayers trillions.

Let's consider for a second just what this means: money is denied to a vital programme whose purpose is to save the lives and restore the living standards of working people during a natural disaster or crisis. Instead, this money is handed over to corporate executives and military contractors!

Some on the left will argue that this is all the fault of Republicans. While it is true that the Romney/Ryan budget proposal would cut up to 40% from Fema in 2013, Obama also proposed to cut Fema funding by another 3% (on top of the huge cuts already imposed since 2010).

This is the logic of 'lesser-evilism', or what some call a 'good-cop/bad-cop' strategy. Republicans propose monstrous cuts to vital services, and then the Democrats propose fewer cuts, and are therefore painted as the 'progressive' choice.

The same logic was forced down the throats of working people when Democrats, heeding the demands of their campaign contributors in the insurance industry, abandoned plans for an enormously popular 'public option' in the healthcare bill, hiding behind allegedly "intractable" Republican resistance.

In an era of rising temperatures and sea levels, with increasingly violent weather patterns (including a series of recent tornadoes in New York-of all places!) an organisation such as Fema should not be cut at all, but instead dramatically expanded and improved!

An effective, fully funded and democratically controlled emergency response agency is the very least that is necessary.

Beyond this, however, the dilapidated infrastructure of vulnerable coastal regions needs to be rebuilt to prevent this kind of damage and loss of life - a point made by New York governor Cuomo but unlikely to be acted upon.

In New York City, the lack of investment in the city infrastructure including water, sewerage, energy, mass transit, roads, and bridges is reaching a critical point.

Like in New Orleans, the effects of this lack of investment will disproportionately fall on the poor and working class of the city.

Climate scientists have been issuing warnings for decades now but the same profit-driven politics that starves our public services and underfunds our infrastructure stands in the way of urgently needed investment in renewable energy.

Real sustainable investments on the scale needed could only be achieved by breaking with capitalism, and replacing this economic system with democratic planning over the use of world resources and technology.

Capitalist politicians, be they Republican or Democrat, have proved themselves wholly incapable of addressing these issues.

They are beholden to the banks and private corporations, including energy companies, for campaign funding. They are the mouthpieces for these big business interests.

The New York Times recently estimated that this year's presidential race will cost a record-breaking $2 billion, roughly evenly split between Republicans and Democrats, with most of this coming from corporate donors.

Capitalist presidential candidates require nearly $1 billion to be "electable" now, just so that - if they do get elected - they can enact cuts to vital programmes such as Fema!

The answer to this tortured logic is not to 'hold our nose' and continue to elect pro-cuts Democrats.

Instead, it is to use all means at our disposal to challenge both capitalist parties. This means organising mass protests, direct action and forming an independent, anti-cuts mass party that challenges the dictatorship of Wall Street and big business.

We live in an era of disaster capitalism. The aftermath of Sandy will only further expose the corporate domination of our governing institutions.

Imagine the impact if working people had a party campaigning alongside the trade unions to fully fund the emergency response, to build safe infrastructure, and to squarely address the catastrophic march of capitalism towards irreversible climate change and the social collapse it will leave in its wake. The urgency to begin organising such a movement could not be clearer.