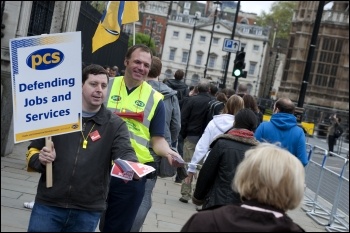 PCS members on strike 10 May 2012 outside Parliament, photo Paul Mattsson   (Click to enlarge)

Lobby the TUC to demand date for 24-hour general strike

Corporate tax dodging... pampered MPs scamming expenses... fat cat privatisers creaming a profit out of our NHS, public services and utilities... the 1% elite load up the lolly and laugh all the way to the bank.

The rest of us are told our future is cuts, and yet more painful cuts, bringing hunger, homelessness and the curse of unemployment - unless, that is, we stop them. 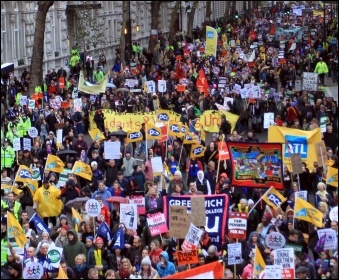 Already millions are struggling to pay the bills and feed their families. In the last two years almost a million more people are failing to eat a balanced diet because they cannot afford adequate fruit and vegetables.

As we go into winter, gas and electricity prices have jumped by up to 11%, further squeezing overstretched budgets.

In his 5 December spending review, Tory axe man Osborne will be forced to admit that Britain's economy is shrinking again.

But the failure of the Con-Dem policies won't stop Osborne announcing public spending cuts of billions of pounds, along with further attacks on workers' democratic rights to organise in trade unions. Added to that are planned savage cuts in local services, effective from April 2013.

It is clear that this government of bankers and millionaires will keep on punishing us unless we organise to stop them in their tracks.

On 14 November workers in Southern Europe organised coordinated general strikes against austerity. Britain's trade unions need to do the same and to announce the date for a 24-hour general strike.

Polls have shown that more than 80% would support such a strike. We need the TUC to name the day so we can set about building for huge popular participation in a strike against all privatisation and cuts in public services, and against cuts in pay, working conditions, pensions and benefits.

Such a strike should also call clearly for the abolition of Britain's repressive anti-trade union laws.

At its September annual congress the TUC voted to 'consider the practicalities of a general strike'. At the magnificent 150,000 strong 20 October TUC demonstration three trade union general secretaries called for a general strike.

On 11 December the TUC general council will be meeting. Join the National Shop Stewards Network from 9.30am when it lobbies to demand that the TUC takes the next step - and names the day! (See www.shopstewards.net for details and campaign material)

Britain has not had a general strike since 1926, although the TUC did call one in 1972 after it had begun to develop from below. Victory was won, however, before it took place!

The relative rarity of general strikes in Britain means that even a 24-hour warning strike would have a massive effect - it would terrify the government and big business while giving a dramatic confidence boost to millions of workers.

Particularly if it was made clear that this strike was a beginning not an end - and that further strikes would be called if the government did not retreat - it would be possible to win a victory.

But is a general strike possible in Britain? Some right-wing trade union leaders argue that it is ruled out because of the straitjacket of Britain's anti-trade union laws. We are not in favour of taking unnecessary risks with trade union funds.

However, workers are facing the biggest attack on their living standards since the 1930s. To fail to lead a serious struggle in defence of workers' rights would be far more damaging to the trade union movement than anything the law courts could deliver.

And it is possible to go a long way towards a general strike even within the straitjacket of the anti-union laws.

Already key sections of workers are discussing the possibility of having to take strike action to defend their own pay and conditions in the first part of 2013. These include local government workers, rail workers, teachers and civil servants.

Whatever the leadership of the TUC decides at its next meeting, trade unions representing those workers should discuss coordinating their ballots - as was done for the N30 pensions' strike last year - so that they could all strike together on one day, in addition to whatever other industrial action they were taking.

Each would be striking on their own specific issues but also participating in a coordinated strike against austerity.

However, coordinated action by some trade unions - while a step forward - is not enough. What is needed is a 24-hour general strike.

Beyond those unions already considering action there are millions - a majority - of workers in Britain who are facing attack over one or more aspect of their pay and conditions.

If the TUC names the day many would have their sights lifted. They would see the possibility of waging a successful struggle and choose to register a trade dispute with their employer over the issues in their workplace.

This would then allow them to legally participate in the general strike. In addition, once a strike started to gain momentum, there is no doubt that millions more workers, many not yet trade union members, would choose to participate. Their protection would be the strength of the strike.

The ability of the government and employers to use the anti-union laws depends on the concrete balance of forces.

When prison officers, who have no legal right to strike, organised action on 10 May this year, the government did not dare to use the law against their union, the POA, as they knew it would escalate the struggle.

The same is true of the construction strikes in 2009. Similarly, employers did not dare to use the law courts in the run up to the N30 public sector general strike, despite the thousands of individual ballots involved, because they knew to do so could lead to workers defying the anti-union laws on a huge scale, and thereby rendering them powerless.

We appeal to all workers to join the National Shop Stewards Network (NSSN) in lobbying the TUC on 11 December, demanding that the TUC names the day for a 24-hour general strike.

Naming the day, however, would only be the first step. Next, a massive campaign in support of the strike would be needed, including mass meetings in every workplace and community to build support for the strike.

If this is done then workers who are not yet trade union members, alongside small business people, students, pensioners and the unemployed, could all be drawn into action.

In the last 18 months the working class in Britain has decisively re-entered the scene of history, with demonstrations and coordinated strikes on a scale not seen for many decades. A 24-hour general strike is the necessary next step.