"Enough is enough!" - Fight all cuts

Build for a 24-hour general strike 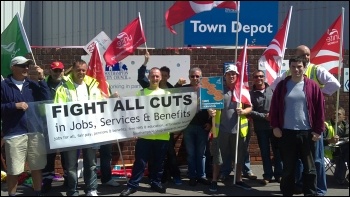 Just before Christmas, the champagne coalition delivered a mean and spiteful present to local authorities, announcing additional cutbacks in government spending on top of those already planned.

In response, the leaders of Newcastle, Liverpool and Sheffield councils wrote to the Observer warning of "social unrest" as a consequence.

Yet even this dire prediction failed to ignite a New Year's resolution from Labour councils committing them to resist this hated government. Not a single council has had the courage to say "enough is enough".

There are a few honourable exceptions. In Hull a group of Labour councillors have declared that they will not vote for cuts. In Southampton, the two 'Labour Councillors against Cuts' are standing firm in their resolve to fight all cuts in the city. 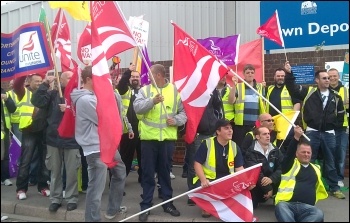 As councillor Keith Morrell explained: "People in Southampton kicked out the Tories last May and won't look kindly on Tory policies being foisted on them this year."

This is absolutely true, yet members of the Socialist Party have been accused of being "from another planet" when we suggest that other councillors follow their courageous stance.

Instead of instigating a city-wide campaign and linking up local authority workers, service users and communities to refuse to implement these cuts, they resort to evasion, dishonesty and scaremongering, invoking the 'big bad wolf' of government minister Eric Pickles, ready to step on any council that dares to fight on behalf of its citizens.

Councillor Don Thomas added: "Labour councillors should stop whinging on about how 'tough' and 'difficult' it is for them to cut services. They should remember the fighting traditions of the labour movement and stand up and defend their class."

The fight to save youth services from extinction is receiving huge support throughout the city. Youth workers and their supporters are determined to "up the anti" and will be demonstrating outside the Extraordinary Council Meeting on Wednesday 16 January.

Under pressure the city council has been forced to ease off their 'bully boy' tactics of intimidating staff from speaking out. Now it is allowing council workers an unpaid two-hour lunch break to take part in an anti-cuts demo on 13 February when the council sets its budget. But it is essential that the unions organising the demo, Unison and Unite, call on the Labour council to side with Keith and Don and not implement cuts.

If the rest of the Labour councillors in Southampton and across Britain are going to carry on following Con-Dem orders, then we need to replace them with representatives who will fight for working class people instead of for the tax-dodging mega-rich elite.

That's why the Socialist Party is part of the Trade Unionist and Socialist Coalition, which stands candidates that oppose all cuts to jobs and services and says 'make the banksters pay' for their capitalist crisis.

"Enough is enough!" - Fight all cuts

2013: Prepare for a mighty battle against deeper cuts

Making it easier to sack workers

Prepare for strike action to save our hospitals

'The Eight Consultations of Christmas' in Southampton