Link to this page: https://www.socialistparty.org.uk/articles/16109 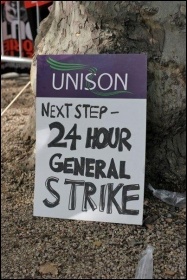 Calls for a general strike of all workers came thick and fast at Saturday's AGM of the Unison south east region.

Only one person spoke against the motions with speaker after speaker pushing for Unison's leadership to take the lead within the TUC.

In moving the Surrey motion, I argued the need for our union to give a lead to the millions of working class people already struggling in Britain.

Food banks are appearing in Surrey County Council offices for the first time in living memory. I also said that the trade union movement needs a general strike to remind the government we exist and that workers hold the real power in society.

Delegates from social workers to admin workers to health workers all spoke of a growing mood of anger and determination amongst Unison members and the support that could be built across the whole union for a general strike.

James Morbin from Oxford Health explained how the tragedies and scandals now unfolding in the NHS are a direct result of the Con-Dem government's privatisation and austerity programme.

All three motions were passed overwhelmingly by the 100+ delegates present and the meeting agreed to send them as a combined motion to the Unison national conference in June.

Many delegates made it clear that we don't want to wait until June for our national leaders to step up to the mark but agreed that the motion should go to conference just in case we are still waiting.

This version of this article was first posted on the Socialist Party website on 11 February 2013 and may vary slightly from the version subsequently printed in The Socialist.