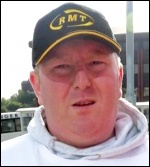 The resignation of Lib Dem minister and MP for Eastleigh Chris Huhne is just one of the latest crises to hit the coalition government.

It is further evidence to reinforce people's sense that politicians cannot be trusted and that they are completely out of touch with ordinary people.

Barely a household in the Eastleigh constituency will have been unaffected by the vicious cuts that have been carried out by the coalition as jobs have gone at Fords, B&Q and elsewhere.

Huhne was an enthusiastic supporter of a government which has pursued massive cuts as well as the privatisation of public services on behalf of big business.

Indicating how much more is to come, the Financial Times recently reported that there are "1,789 outsourcing opportunities worth £84 billion in the government pipeline." This spells more disaster for jobs and services.

Who will speak out on behalf of all those facing redundancy, losing vital public services, having their benefits slashed or being priced out of education? Some people will argue that the only alternative is to vote for a Labour candidate.

But in parliament Labour has failed to fight on behalf of all those hit by austerity. In fact, they were the originators of many of these policies, particularly cuts to benefits, privatisation of health and education as well as cuts in local government.

As workers increasingly engage in battles to defend their living conditions, the question of how to challenge those carrying out the cuts is posed sharply.

A new mass workers' party, democratically controlled and opposed to all cuts, must be built.

The Trade Unionist and Socialist Coalition (TUSC) is a key step in this direction and is standing a candidate in the Eastleigh byelection on 28 February.

The candidate for TUSC will be Daz Proctor, from the RMT council of executives. He explains why he is standing for TUSC in this extract from the election communication.

I currently represent this region on the national leadership of Britain's largest transport union, the Rail, Maritime and Transport workers union (RMT) and am secretary of Southampton shipping branch.

I have been actively campaigning against shipping companies who pay 75p per hour on the cruise ships out of Southampton and £2.35 per hour on Condor ferries in Portsmouth.

My trade union was also instrumental in the formation of the "Stand Up For the South Coast" campaign, highlighting how incompetent politicians are looking to line the pockets of the greedy elite, rather than protect the normal working people of this country.

Career politicians privatise our services, attack education and the development of our youth, attack workers' rights and making it easier to hire and fire, and send our unemployed into poverty with welfare reforms.

For this they think they have earned a huge pay rise, while the working man and woman struggle to make ends meet.

We must stand up for our public services which we have built up over generations. Now we are seeing them attacked, fragmented and sold off in front of our very eyes.

And public sector workers are blamed and told if they want their pensions, they must pay more, work for longer and get less while suffering pay freezes!

Billionaire business is rewarded for failure, through taxpayer funded bonuses, yet the residents of Eastleigh are victimised through job losses.

If you want to oppose the attacks, want an alternative representative from a working class background who understands the struggles of everyday life, the importance of our public services remaining public, and who knows that blame lies with the billionaires and not the workers, I am your only choice!

The NHA was established by health professionals after the final passage of the Con-Dems' health and social care 'reforms'.

Its co-leaders are Dr Clive Peedell, chair of the NHS Consultants' Association, and Dr Richard Taylor, who was the Independent Health Concern MP for Kidderminster from 2001-2010.

In January the TUSC national steering committee wrote to the NHA to open a dialogue with them, "including how we might be able to avoid future electoral clashes".

This was when Chris Huhne was trying to have his case dismissed which, if he had succeeded, would have left him still as Eastleigh's MP.

Unfortunately there was no response; while the NHA website, in its FAQs section, highlights that it has no "formal relations with any trade unions", bracketing unions with "the major parties".

The NHA is another important symptom of the disenchantment of millions with the establishment parties, and it needs to be engaged with.

But without a trade union base, or a clear programme beyond saving the NHS, it is not necessarily the antidote.