Link to this page: https://www.socialistparty.org.uk/articles/16168 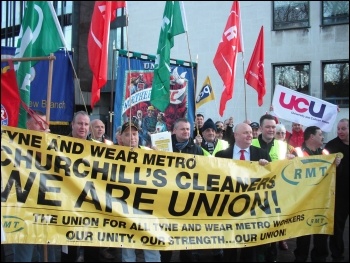 Churchill cleaners from the Tyne & Wear metro have stepped up their battle for a decent living wage. Building on rock-solid strikes over the course of 2012, this most recent strike is for seven days.

One of the strikers told the Socialist that RMT reps from the Churchill dispute had been down to London to meet up with the RMT's executive committee and the decision was made to ratchet up the ante and put on a week-long strike.

The striker went on to say: "If this doesn't budge them then we'll be looking at a two week strike or potentially a month".

The striking cleaners, who are on the minimum wage, are angry that Churchill is attempting to enforce a 0% pay award.

Churchill has repeatedly made the claim that it cannot afford to increase the wages of cleaning staff, yet this 'rubbish' cleaning company has doubled its profits in the past five years, making almost £7 million from the exploitation of low paid cleaners.

While Churchill cleaners receive no sick pay, no pension and don't even get travel concessions on the metro they clean, the company's highest paid director has had a salary increase of more than 18% in the last five years.

No wonder the feeling amongst the strikers is 'enough is enough' and there is clearly a mood of determination to see this battle through.

The seven day strike also coincided with Newcastle's march and rally to Save our Services. On the demo the strikers made a big impact, flying RMT banners high.

It was clear on the demo that the Churchill cleaners have a lot of support in their struggle against poverty wages.

"RMT members have shown guts and determination through this long and hard campaign of rock-solid strike action in the fight for workplace and pay justice which is now one of the longest running current disputes in the British Labour movement and I will be taking the full support of RMT's membership with me onto their picket line on Thursday.

"This week we have ratcheted up the action with a seven day strike and have been back on the picket lines and out on the streets geared up for a victory that we know is within our grasp as we continue to pull in both top level political support and the backing of the public.

"The message to Churchill's, NEXUS and DB Regio is that you will never be able to hide away from the gross exploitation on the Tyne and Wear metro which is being played out on your watch.

"Now is the time to end the culture of poverty pay which is a stain on transport services across the North East."

This version of this article was first posted on the Socialist Party website on 19 February 2013 and may vary slightly from the version subsequently printed in The Socialist.