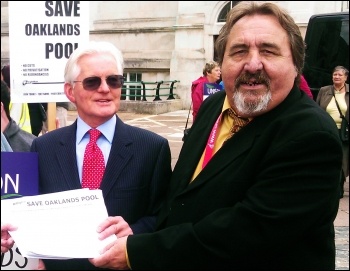 Working class people all over the country are facing vicious cuts in council services. Labour councils are generally responding by wringing their hands and making the cuts anyway.

But in Southampton two councillors, Don Thomas and Keith Morrell have refused to do this and have made an important stand against the cuts.

They have been expelled from the Labour Party as a result. On 13 February they put an alternative budget to the council, which the council tried to gag.

But as the reports below explain, a protest before and lively interventions in the council meeting made sure the cuts budget was exposed and an alternative posed. The fight against the cuts goes on!

Lessons of Southampton - councillors have a choice

Is it true that councils really have 'no option' but to pass on the Con-Dems' cuts? That's the argument being made by Labour councillors as they meet to set their 2013-14 budgets.

A core policy of TUSC is that when faced with government cuts to their funding, councils should refuse to implement them.

It argues that the best way for councils to mobilise the mass campaign that is necessary to roll back Con-Dem austerity would be for them to set budgets that meet the needs of their local community and demand that the government makes up the shortfall, like Liverpool council successfully did in 1984.

But to save jobs and services now while building such a campaign, TUSC would support councils using their reserves and prudential borrowing powers to avoid passing on the Con-Dem cuts.

But is even this 'buying time' strategy possible? What about local government legislation that commits councillors to setting a 'balanced budget'? Wouldn't council officers step in and set the budget themselves? All these questions have come up in the anti-cuts struggle in Southampton.

But it began to win support from council workers and service users. And when the 'rebel two' councillors Keith Morrell and Don Thomas submitted a draft budget amendment to increase Southampton's 'unsupported borrowing' by £22 million, council officers were forced to respond.

The rebel councillors' proposals met the legal requirements of a balanced budget at least for the 2013-14 financial year - it was not a 'deficit budget'.

But the council's chief financial officer (CFO) would not endorse it as a 'prudent budget capable of implementation'.

He argued, for example, that Southampton was not in a sufficiently 'dire financial position' to successfully apply for a 'capitalisation direction' (government supported borrowing to fund day-to-day 'revenue spending'), one of the alternative budget proposals.

Consequently council officers advised the Mayor - an elected Labour councillor - to make a chair's ruling that the amendment would not be debated at the council's budget-making meeting and that's what he did.

But it could have been debated. The myth of the all-powerful officers was shown to be just that - it was councillors who closed off the debate.

Even the legal guidance all the Southampton councillors received - and this is standard everywhere - made it clear they had the power to "determine whether they agree with the CFO's statutory report issued under section 26 of the Local Government Act 2003".

That means, of course, that if there are genuinely different assessments that could be made, councillors can make them.

Before the meeting Keith and Don wrote to every Labour councillor asking them to use the legal power they had to at least allow their amendment to be debated.

The officers were, inevitably, making a political assessment of their proposals. So "it's worth asking", they wrote, how many CFOs in November 1990, just before the fall of Thatcher, "began drawing up budget proposals for 1991-92 confidently predicting that, just four months later, the Community Charges (General Reduction) Act would have gone through parliament, cutting the last poll tax bills by £140 and increasing government support for local authorities by £4.3 billion (nearly £7 billion in today's money)?"

"Isn't it for elected councillors to judge whether the crisis for public services in the city is 'sufficiently dire' for the steps we propose to be taken?", Keith and Don asked. Evidently not, as the Labour councillors backed the Labour Mayor's ruling.

Nothing can hide this lesson of Southampton. Councillors have a choice. There are alternatives to implementing the cuts. And Labour councillors chose not to take them.

The following article was part of this feature on Southampton in The Socialist:

Council budget commended to the dustbin by protesters

In the local press

Extracts from Southampton's Daily Echo, after the council meeting:

"[Keith Morrell said:] 'The trade unions were instrumental in getting Labour elected and I think there's a lot of disappointment among their members that Labour isn't delivering.

'There's a lot of union members who are angry, frustrated and probably unsure where to go - they put their faith in Labour.

'The trade unions should be doing more, if only to reflect what their members want from them.'

The pair are now working to form a local group so that they can field anti-cuts candidates across the city during the next election."

The campaign for TUSC candidate Daz Procter has kicked off in earnest. We are getting a great reception in our challenge to all the wannabie seat warmers.

Daz has explained that his candidacy is different - rather than being just another career politician he promises to be a workers' MP on a worker's wage.

Instead of pocketing the large MP's salary he would put the extra cash into funding the fight against cuts.

On Saturday 16 February we were out on the streets of Eastleigh mixing it with other parties.

The Lib Dems and Ukip were out in force or was that farce! The Tories were scuttling about looking busy and intent, but leaflet-lite.

As for Labour, well no sign, save for a bloke with a rosette (apparently an ex-councillor), who crossed the road to our stall and proceeded to unburden his angst.

He tried to clothe himself with some verbal radicalism but was questioned about the role of the Labour council in nearby Southampton.

His response to the expulsion of the two anti-cuts councillors in the city was to accuse Keith Morrell of being "a Tory" who "speaks with a forked tongue" and Don Thomas of "being ill!"

Daz has compared the byelection to a travelling circus, swooping in to town, but they'll all be gone by Friday, after the vote on Thursday 28 February.

But, he points out, the trade unionists and socialists who make up TUSC will still be there fighting the cuts.

A Lib Dem supporter approached one of our activists saying "Oh you're TUSC, a real socialist."

Another TUSC campaigner was asked: "Where is the money coming from, you can't take it off the bankers?" "Well they ****ing took it off us" was his reply!

The next day was something else entirely - a hustings.

TUSC was up against the heavyweight hopefuls of Ukip, whose candidate was stuck in a double default position of the EU and immigration, shoving it into as many answers as possible.

'Mogadon Mike' of the Lib Dems, is so named by an ex-Ford worker for his personality bypass.

As for the Tory candidate, she has an uncanny ability to put her foot in it at every turn.

In a three minute intro it's pretty tough to get your message across, especially to an audience primarily composed of coalition faithfuls from some of the more affluent parts of the constituency.

Nevertheless, we managed to get a smattering of applause after repudiating the lies of austerity and voicing the disgust and disenchantment that local people had towards the self-serving political elite.

The rebel councillors' alternative budget proposals and the letter to the Labour councillors can be read at http://www.tusc.org.uk/press180213.php