Link to this page: https://www.socialistparty.org.uk/articles/16339 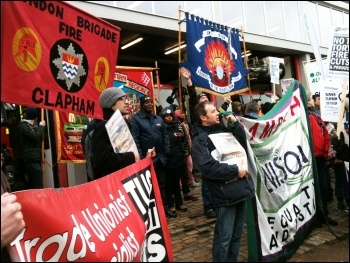 Clapham march to save fire station

Residents and campaigners marched in their hundreds on Saturday 16 March to resist the closure of Clapham fire station, one of 12 London stations to fall victim to London mayor Boris Johnson's slash and burn budget.

The planned cut of £50 million to the London Fire Authority would result in the loss of 520 firefighter posts and the scrapping of 18 engines.

While the Fire Brigades Union (FBU) has vowed to fight the attack, with strike action if necessary, the London Fire Authority has outrageously buckled and agreed to consultation on the cuts after twice voting against them. 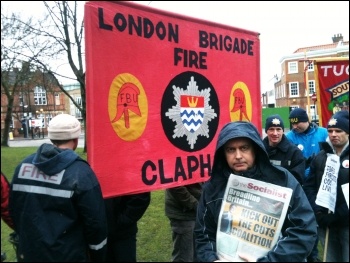 Among those marching with the FBU were Lambeth Save Our Services, members of the Women's Institute, trade unionists, socialists, students and school students.

Car horns and cheers of support greeted the demonstration as it snaked from Clapham Common to Clapham North and back through busy shopping streets.

FBU regional secretary for London, Paul Embery, said: "These cuts are dangerous and wrong. No one wants them, apart from Boris Johnson.

"Public safety is playing second fiddle to crude economic ideology, and that is inexcusable." 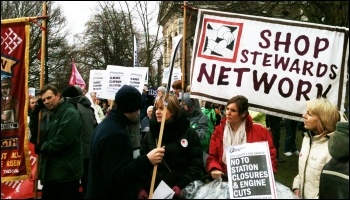 While the local Labour Party made an appearance on the march, the party is scandalously passing on service cuts elsewhere in London, raising the need for independent anti-cuts election candidates to raise the alternative to austerity.

If this attack succeeds, City Hall will be gambling with the lives of five million Londoners in the 20 affected boroughs.

As part of the same fight to defend our NHS and our vital public services, we must organise an all-London demonstration against fire service cuts and call on the TUC to name the date for a 24-hour general strike.

This version of this article was first posted on the Socialist Party website on 19 March 2013 and may vary slightly from the version subsequently printed in The Socialist.