From The Socialist newspaper, 8 May 2013 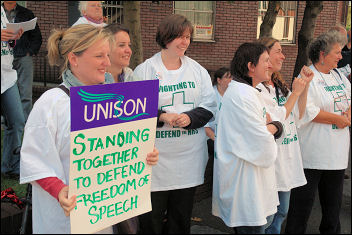 Steve Cullen of USUC says: "We remain totally opposed to the reorganisation and will keep lobbying elected mayor Ian Stewart and the councillors.

"The fight is not over yet but we're seriously concerned that some people with mental health issues will get into arrears on the bedroom tax or not understand the letters sent out.

Some people could take their own lives. One service user did so after he queried when his Drop-In centre would re-open.

He was met with the response that the authorities: "don't know and hope it doesn't open again". In turn he must have thought he had been kicked out of the Drop-Ins, which he had used for some years, which was like a little community or family network.

Greater Manchester West NHS and the council are also to put Drop-Ins in local community shared buildings, which many service users won't go into.

Peter Connor, Assistant Mayor for Adult Social Services, made this decision. When we met him last year he told us: "they should not be closing these drop-ins, if anything they should open more of them." This shows how two-faced he really is!"

One in five borrow to buy food

Defend Liverpool's jobs and services - then and now

Portugal: Government in disarray... Left must seize the opportunity

The Palestinian struggle - How can a state be realised?