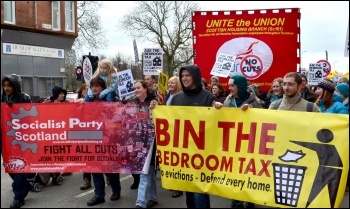 Over 2,000 people attended the anti-bedroom tax rally in Glasgow's George Square on 1 June, called by the Scottish Anti-Bedroom Tax Federation.

Cheryl Gedling from PCS Scotland stated that the trade union leadership had a responsibility to lead the fight against austerity, including a 24-hour general strike. The rally also heard speakers from the EIS and UCU trade unions.

Luke Ivory, federation national secretary and Socialist Party Scotland member, explained that the SNP government and Labour councils could bin the bedroom tax tomorrow through borrowing powers and changing legislation, but are not willing to fight the Tories. Luke also raised the idea of standing anti-cuts election candidates.

Federation chair Tommy Sheridan appealed for everyone to become "organisers against the bedroom tax in your area".

"Can't pay, will stay" was the headline on the 163 copies of the Socialist (paper of Socialist Party Scotland) sold at the rally.

Several thousand leaflets were delivered. Headed, "I am still your councillor," the leaflet explained why he voted against cuts and calls for no evictions for bedroom tax, and also his subsequent suspension from the Labour group.

The other side of the leaflet gave practical advice on appeals and discretionary payments for bedroom tax, and called on the council to re-designate houses out of liability for bedroom tax and pledge no evictions.

Warrington Against the Bedroom Tax

The Coventry Against the Bedroom Tax campaign is gathering pace. Over three consecutive days we held two excellent public meetings, followed by a lobby outside the board meeting of Whitefriars Housing.

28 people attended the meeting in Hillfields. In Stoke the next day, over 40 people came to a meeting.

Former Labour MP and Socialist councillor Dave Nellist spoke at both meetings. Tenants were given appeal forms to submit to the council.

One tenant explained that he'd been hit by the bedroom tax on his 'spare room' - despite the room being just 2.5 metres long and 1.3 metres wide! His landlord should stop him being affected by reclassifying the house as having one bedroom, not two.

Around 40 people came to the lobby of Whitefriars to demand that they don't evict tenants due to the bedroom tax.

There are 13 members of the board, four are tenants and three are Labour councillors. If they argued for a non-eviction policy they would have a majority!

Around 100 people gathered in College Green in Bristol to oppose the bedroom tax. The Bristol and District Anti-Cuts Alliance (BADACA) called the protest to keep up the pressure against this cruel and hated policy.

People from estates across Bristol spoke to say how they were being affected and how local groups formed to defend against eviction and debt collectors.

BADACA will be lobbying the council meeting in a couple of weeks where the bedroom tax will be discussed.

We have been pushing for this not to be a pious statement but a practical commitment to protect tenants.

The fightback against the bedroom tax in Middleton, Heywood and Rochdale is well under way.

At least one person said that they had already been threatened with eviction.

It was decided that an anti-cuts movement for the area should be formed: Middleton, Heywood and Rochdale Against the Cuts (MHRAC).

This umbrella group staged a protest on Monday 3 June outside Rochdale council's meeting. A group of around 50 chanted slogans such as "axe the bedroom tax" and "can't pay, will stay".

Eventually the group were invited in to address members of council. Council leader Colin Lambert was 'sympathetic' but gave no commitment to a non-eviction policy.

So the campaign continues, the next meeting will be held in the Olde Boars Head Pub, Long Street, Middleton, M24 6UE on 13 June at 7pm.