A political voice for the working class

They stood as workers' MPs on a worker's wage, which would be a shining example to today's sleazy politicians.

To celebrate the years they spent providing genuine working class representation in Parliament, and to hasten its return, we reprint part of The Rise of Militant by Peter Taaffe and a report of part of Terry Fields' maiden speech in Parliament.

The 1983 general election, when Labour nationally received its lowest share in the poll since 1935, was not the overwhelming triumph for Thatcher which historians claim.

The capitalist-inspired scheme for splitting the Labour vote had partially succeeded. Disenchanted Tory voters and some Labour voters also swung over to support the SDP [Social Democratic Party - a right-wing split from Labour - eds] /Liberal Alliance.

Labour's radical proposals were undermined when the leadership was incapable of answering the question: "How will it be paid for?" Foot emphasized the need for borrowing and devaluation, reinforcing the impression that Labour intervenes to spend its way out of a crisis.

This raised the idea of a massive expansion in public expenditure but without the economic base [ie a socialist plan of production - eds] to sustain it.

The election results in Liverpool, however, stood out in marked contrast to most other regions. Completely against the national trend there was a 2% swing to Labour in Liverpool.

This, Militant commented, "was due in no small measure to the influence of Militant supporters in that city, where Terry Fields was elected as MP in Liverpool Broadgreen". Broadgreen was the second or third largest swing to Labour nationally in 1983.

Alongside Terry Fields in Parliament was Dave Nellist, Labour MP for Coventry South East, who also chalked up a notable victory in the election.

In Parliament the working class found no better representatives than Terry Fields and Dave Nellist. The class loathing which workers on Merseyside felt for the Tory victors was voiced in Terry Fields's maiden speech in Parliament.

New MPs are expected to congratulate opposition speakers and wish well to their retiring or defeated constituency rivals.

Such pleasantries were cast aside when Terry Fields spoke. He was there to represent the Liverpool workers. His full speech was printed in Militant [see extract, below].

In 1983, half a million youth were to be subjected to industrial conscription at £25 a week. Dave Nellist's forceful maiden speech highlighted gathering opposition to the Tories' Youth Training Scheme (YTS).

Dave ardently championed the rights of youth in his nine years in Parliament. His speech pointed out:

"Only one in ten of those leaving the fifth form last summer have found work. In a city (Coventry) built on engineering, only 243 out of 5,000 who left school this summer found apprenticeships... I speak today as the youngest Labour member elected in last month's general election.

"That gives me a special responsibility in this place to champion rights, and to give voice to, the hopes and aspirations of millions of young workers."

Pointing to a switch in the Tory government's attitude towards youth he asked:

"What changed their attitude? The principle answer is the events of the summer of 1981 - the riots on the streets of Liverpool, London, Manchester and other major cities - desperate action by tens of thousands of teenagers to draw attention to the poverty, despair, demoralisation, harassment and anger of being young and unemployed under a Tory government...

"Thousands of YOPsters [young people on the government's 'Youth Opportunities Programme for 16-18 year olds] have been recruited by the Labour Party Young Socialists into membership of the trade unions...

"I issue a warning to the government. Do not be misled by the siren voices of the media into believing that we are witnessing the creation of a right-wing generation of youth or that the labour movement is demoralised or weak when faced with another term of Tory rule... Our labour produces the wealth, which the government's capitalist society squanders on useless weapons of nuclear destruction, on tax cuts to the super-rich, on stockpiles of food at a time of growing poverty and on keeping five million people unemployed. As society approaches a crossroads, the socialist programme will gain significant support."

Unfortunately the election of Neil Kinnock [following Michael Foot's post-election resignation] as Labour's new leader with Roy Hattersley as his deputy, was the start of many changes in the party.

Kinnock was the perfect "left" screen, behind which the right began the counter-revolution against the gains on policy and programme registered between 1979 and 1982.

Soon after the election, the reselection of Labour MPs was challenged by the right. All the conservative forces in the Labour Party - the place men and women, self-seekers, the party's officialdom, and the union leadership - looked for a figure to front their "counter-revolution" which laid the basis for New Labour."

Sadly Terry Fields died in 2008. Dave Nellist is a member of the Socialist Party and helping to build for the time when the working class, in Terry Fields' words, arise from their knees and banish capitalism to history.

Terry Fields: 'A militant is a moderate who has got up off his knees' 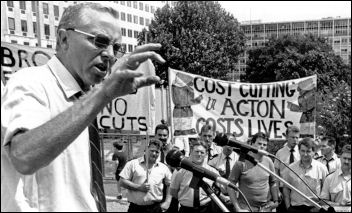 Maiden speeches are supposed to be non-controversial but having listened to the cant and hypocrisy from the Conservative benches it is difficult to keep my temper let alone observe the proprieties of this place.

For the working class people who sent me here to represent them, matters in our area are far too pressing and urgent.

The solutions I will be proposing to the problems of our people will be controversial to the government but not to the people of Broadgreen and Liverpool. Because of those policies, we obtained victory in Broadgreen in the general election.

Conservative members talk about privatisation. Let us call it by its proper name - asset-stripping. It is the reward and rake-off for those who gave £20 million in handouts to the Tories to fight the election.

I hope that members of the Post Office Engineering Union [now part of the CWU union - eds] and other organised workers will stand up and fight the government's proposals to close their industries and sell them to private individuals.

Since the Tories came to power in 1979 Merseyside has lost 48,000 jobs. One firm a week has closed its doors.

In some areas 94.7% of young people are unemployed. That is the grim reality of Tory Britain for the people I represent.

In the 5 May local government elections the people of Liverpool ditched the Liberal-Tory ruling alliance and elected a Labour-controlled Liverpool city council to fight to reverse the decline of our once great city.

On 9 June the people of Liverpool elected five Labour members out of a total of six. They campaigned uncompromisingly on socialist policies, which the electorate of Liverpool have accepted as the only hope for the majority in society in the face of heartless Toryism.

Workers in Liverpool who have had to suffer longer and harder than workers in most areas from the excesses of capitalist exploitation have turned correctly to a political solution for their problems.

At the start of the election campaign, the prime minister said she was giving the British people an opportunity to banish socialism and Marxism from the land.

Others stronger than she have tried and failed. Labour may have been defeated at the election, but socialism and Marxism have not been, and will not be, defeated in the eyes and hearts of the working class.

My election victory in Broadgreen, which for decades was a marginal, refutes the prime minister's boast.

The media, seeking to denigrate me and the socialism I stood for, made great play of the label 'militant'... I wear the badge of a militant with honour.

A militant is only a moderate who has got up off his knees. In time, the whole working class will arise from their knees, and you will not be laughing then.

Towards another Tory party

The Labour Party was transformed from a workers' party at base - albeit with a capitalist leadership - into an unalloyed party of big business that has left the working class without a political voice.

Terry Fields had been jailed for refusing to pay the poll tax. But, instead of standing alongside the working class, Kinnock said: "The Labour Party does not and never will support breaking the law.

"Mr Fields has chosen to break the law and he must take the consequences. He is on his own."

It seems Kinnock thinks it's 'better to break the poor than break the law'! Terry Fields was expelled on the evidence that he had made a call for Labour to "nationalise the commanding heights of the economy"!

Dave Nellist was expelled for refusing to repudiate Militant.

The witch-hunt against Militant supporters, the Militant MPs and the left of the Labour party by the right wing were all steps towards pro-big business, anti-worker New Labour.