End the rule of big business, poverty and war 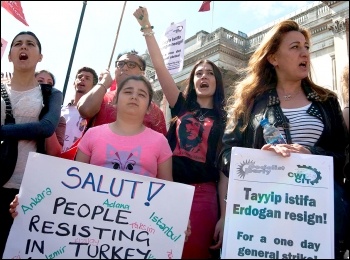 The leaders of the most powerful nations in the world will soon descend on Enniskillen, County Fermanagh, for the 17-18 June G8 Summit. We can expect much empty rhetoric from David Cameron, Barack Obama and other world leaders about how Northern Ireland is a model for 'peace, stability and growing prosperity', which the G8 wishes to emulate on an international level.

Nothing could be further from the truth. Northern Ireland has some of the highest rates of poverty and joblessness on these islands and society remains divided along sectarian lines.

The huge security operation surrounding the summit is like the worst of the 'Troubles'. Thousands of armed police and military equipment will flood Fermanagh. These repressive measures are an attempt to intimidate workers and young people from protesting against the G8's policies.

And there is a lot to protest! The G8 heads of state lead the way in making the working class pay for the crisis of their capitalist system. Austerity policies have caused Depression-era conditions in Greece, which will soon be repeated in Cyprus. 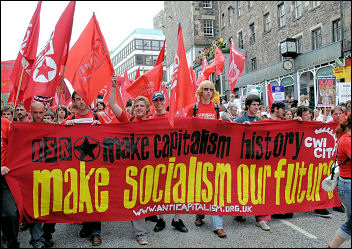 The Committee for a Workers International protesting at the G8 summit 2005, photo Paul Mattsson

Mass unemployment stalks the EU, officially at nearly 20%. Youth joblessness in Spain is over 60% and around 80% in Greece.

The G8's austerity policies are not working. Most of Europe is in deep recession or facing economic stagnation. The US has feeble growth but also falling wages and rising social inequality.

The G8 represents the opposite of 'prosperity, peace and stability'. Under the capitalist profit system, almost half of the world's population struggles to live on less than $2.5 a day.

The G8 represents the super-rich 1%. The 'great philanthropist' Bill Gates, of Microsoft, has total wealth estimated at $66 billion, which is enough to end world poverty and still leave him with change.

One of the G8's stated purposes is to "save" African people from starvation - by corporate land grabs and control of the continent's markets!

The G8 also represents a system that causes war and environmental destruction. Since the economic crisis began, a staggering $1.75 trillion was spent by world powers on the highly lucrative arms industry.

The current Turkish uprising, which started in Taksim Square, is encouraging anti-G8 protesters in Belfast and Fermanagh, despite the security clampdown. The magnificent movement in Turkey has the potential to bring together working people across ethnic and national divisions, linking up with the organised working class, to become an unstoppable force to change society.

The 'G8 Not Welcome' campaign, initiated by the Socialist Party in Northern Ireland, will hold a demonstration in Enniskillen on 17 June, the first day of the Summit. This protest, with trade union backing, will bring together Catholic and Protestant youth, socialists, trade unionists and others.

But marching together is not enough. A workers' alternative to the G8 and pro-big business parties is needed in Northern Ireland, Britain and everywhere.

The CWI campaigns for jobs, homes, a living wage and decent benefits. It fights for socialism - democratic public ownership and planning of the major industries and banks which would unleash colossal wealth and resources for the benefit of the '99%' - to end the rule of big business, poverty and war.

G8 Summit - what were the decisions?