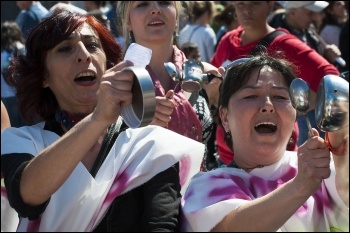 At least 15 people were taken into hospital, including one man taken into intensive care with a brain injury.

During two weeks of protest, hundreds of thousands have taken to the streets. The slogan, "Tayyip istifar" - "Erdogan resign", unified the protests from public sector workers to people alienated by the government's clampdown on drinking alcohol and kissing in public.

It reached out to Kurdish people, who continue to face repression. It included trade union activists and environmentalists who initiated the protests in Taksim Square. It also mobilised working class youth from the suburbs.

Erdogan is trying to mobilise support among more conservative and religious people. He described protesters as just "a handful of looters" or "vandals".

Erdogan has now announced mass demonstrations in support of his government for Saturday 15 June in Ankara and Sunday 16 June in Istanbul. The timing of this is no accident.

Over two weeks, working people and youth defended their protests against the police daily. Apart from the main squares in the cities, there were hundreds of neighbourhoods where - without much media attention - thousands assembled at night. On almost each occasion they were attacked with police tear gas and clubs.

The public sector strike on 4 and 5 June was not followed up by further action of the organised working class.

Activists from left-wing groups are organising the camps in the squares and in many ways leading the movement on a daily basis.

However, none of the bigger organisations, parties or trade unions puts forward a strategy to advance the struggle and appeal to wider sections of society to support the protest movement.

Action and defence committees were formed, but mainly to deal with day-to-day questions and mainly composed of left-wing groups.

It is vital to build assemblies and committees on all levels, to defend the movement and bring down the government, but also to offer an alternative in the interests of workers, youth and poor people.

Such a movement could undermine Erdogan's conservative and Islamic supporters too, who also suffer from Erdogan's neoliberal policies.

Unfortunately, even on the left, demands are already being watered down. The last few days has focussed on defending Gezi-Park and democratic demands, to bring those responsible for the police brutality to justice, and for the right to protest.

All of that is necessary, but a strategy is needed to fight for an alternative to Erdogan's government.

A majority of the protesters were young and alienated from all the main parties. This vacuum has to be filled by building a new, democratic mass party armed with a socialist programme. Left forces HDK and Halk Evleri can play a significant role in this.

In the absence of these factors, the number of demonstrators fell slightly on 10 June. Erdogan seeks to exploit this weakness to regain control, although this may provoke a new wave of struggle.

Sosyalist Alternatif, the Socialist Party's sister organisation in Turkey, argues for protest now against the police attacks, for mass demonstrations in all cities on Saturday and for a national joint demonstration on Sunday in Istanbul to give Erdogan a strong answer and to prepare the ground for a one day general strike as a further step to fight for an end of the AKP's government.

A socialist Turkish Kurd, who came to Britain in the late 1990s as an asylum seeker, spoke at a recent Leicester Socialist Party branch meeting.

"This week fans from Karşıyaka and Göztepe joined together with their team scarves and banners.

They were standing shoulder to shoulder, shouting slogans against fascism and singing resistance songs. They were united in resisting the violence of the police.

This was very moving for me. Some of the fans were in one of the squares where I was on May Day 1996. A clash took place with police.

I was trying to jump over a wall to get away from them but the police caught my leg and they cracked my head.

I couldn't run away. I had to have 14 stitches in my head and three days off school. I was only 16 years old.

Seeing all this resistance, playing music, chanting and singing together, sharing food, lifted my spirits.

I wished I could be there. I know our sacrifice was not wasted. It shows we were not idealists - we were realists. The ideas of socialism can triumph and make the world a better place for us all."