Link to this page: https://www.socialistparty.org.uk/articles/16901 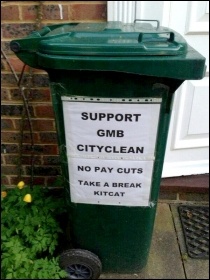 On Friday hundreds of people rallied in support of Brighton CityClean workers as they began a seven-day long strike against planned pay cuts by the Green controlled council.

The picket line outside the bin depot began in the early hours of Friday morning and was soon spilling into the road, swelled by bin workers, their families, other union members, students and bedroom tax campaigners.

The strike successfully closed the depot, with its gates shut and barred with placards telling the loathed Green council leader Jason KitKat to "take a break from cutting our pay".

A reporter for the Socialist was told that the strike was 100% solid, and succeeded in drawing in Polish workers to the dispute - there had been a worry that management would try to drive a wedge among the workforce but it has clearly been unsuccessful.

The only person who tried to cross the picket line was a former driver turned manager who set out on a one man mission to drive a refuse truck around the city. He was quickly turned away! 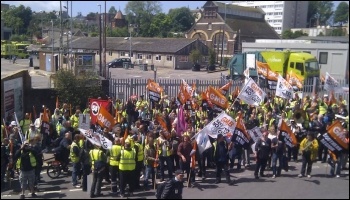 The council is looking to slash wages by as much as £4,000 in a move that has further exposed the Green councillors' failure to stand up to central government cuts.

Firstly voting through a cuts budget and ruling out the possibility of a needs-based budget, they have now begun attacking the pay of some of their own workforces' lowest paid workers.

As we have consistently pointed out in Brighton, a refusal to implement cuts by the council could have been the basis for a mass campaign demanding that funding is returned to the city.

Instead the Greens have tried their own strategy of imposing "fair" cuts, leading inevitably to attacks on council workers.

Cuts are cuts; a heavy heart will make no difference to a £4,000 reduction on a bin worker's pay slip.

Councillors should be busy fighting the Con-Dem government's cuts, not their own workers!

This has caused frictions within the local Green Party with its local branch urging the councillors to stop their cuts plans.

Caroline Lucas, former Green Party leader and local MP who has come out in support of the bin workers, visited the picket line in the morning with some of the Green councillors who are opposed to the plans.

One of those councillors, who held the position of deputy leader of the council has since had it revoked, showing the arrogance and determination of the councillors grouped around leader Jason KitKat to push through these pay cuts, even if it threatens to tear apart their party locally.

It is also worth noting the absence of the local Labour Party from the picket lines, they have been invited by the GMB union to the demonstration on Saturday, it remains to be seen if they turn up.

The absence of any solid political support again shows the vast gulf there is in society for a new party that opposes all cuts and stands on the side of striking workers.

The Green Party, Labour as well as the Tories and Liberals have now all had their record tainted by cuts and privatisation.

The Trade Unionist and Socialist Coalition (TUSC) locally has been giving solid support to the bin workers.

Socialist Party member Phil Clarke, who is also secretary of the local Trades Council, is standing as a TUSC candidate in a local council byelection and was warmly received at the picket, with leaflets being snapped up as soon as the "support Cityclean workers" slogan was seen.

TUSC is providing the only byelection candidate who not only opposes cuts to workers' pay but proposes a strategy for stopping them, and all cuts in the local area.

This is to refuse to implement government cuts and to build a campaign around a needs budget for the city.

As rubbish piles up around the streets of Brighton, the council is going to come under increasing pressure to shelve its plans.

And while the council will undoubtedly try to use the disruption caused by the strike to turn public opinion against the workers, when the issue is explained clearly, very few people fall on the side of the council; a recent poll in a local paper showed 70% of people blamed the council and not the workers for the strike.

Not surprising, who can afford to take a £4,000 pay cut in society today, when pay cuts and freezes are the norm for millions of ordinary people?

In the past the workers at the bin depot have won a similar dispute with one day of strike action, let alone seven! It remains to be seen if the council will try to stick it out, certainly some workers think they will.

But that determination is going to matched by that of the workforce, summed up by a picket on the first morning: "We're going to strike for seven days, and if that isn't enough, then we'll come out for more - we're not going to take a 20% pay cut lying down".

A demonstration was planned for Saturday 15th June, and will see hundreds of pickets and supporters march from the depot to the town hall, demanding the council change their course (see below).

Hundreds of people joined the march by striking council workers in Brighton on 8th June.

The march from outside the bin depot to the council offices was well received by residents who stood on the route and applauded.

The dispute has split the Green council, with several Green councillors joining the march and signing an open letter to council leader Jason Kitcat calling on him to resign.

At a rally outside the main council building, national GMB secretary Brian Strutton said that the workers had the resolve to win this dispute and pledged £100,000 from national funds to support the strike.

Phil Clarke, standing as a TUSC candidate in the Hanover ward byelection in Brighton outlined the political alternative to cuts and austerity of the main parties and said the election campaign would also be a platform for supporting the strike, although undoubtedly there was widespread public support.

The mood was determined and workers pledged to keep fighting until these proposals are taken off the table.

In a reference to Brighton and Hove council chief executive Penny Thompson, who is forcing through the cuts, they chanted that their pay will be cut "by not one penny".

This version of this article was first posted on the Socialist Party website on 17 June 2013 and may vary slightly from the version subsequently printed in The Socialist.