Link to this page: https://www.socialistparty.org.uk/articles/16976

The news that an undercover police officer was tasked with trying to find out any information that could discredit Stephen Lawrence's family is terrible and shocking, but unfortunately not surprising.

Last year's revelations of police attempts to discredit the victims of the Hillsborough disaster show that this was not an isolated incident.

The officer concerned, Peter Francis, infiltrated Youth Against Racism in Europe (YRE) over several years and was known to us as Pete Daley. 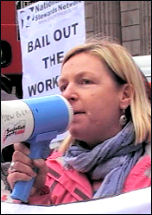 Lois Austin speaking at a National Shop Stewards Network protest outside the bank of England during the credit crunch, photo Pete Mason

"It took 18 years for the police to convict any of Stephen Lawrence's murderers. Meanwhile, time and money was being spent searching for 'dirt' on a bereaved family, and secretly infiltrating Youth Against Racism in Europe, a peaceful organisation of young people, which was organising mass protests against racism and the BNP.

"There was no purpose to infiltrating YRE, far from being secretive we publicly advertised our events - the police could have read our leaflets and newspapers, or attended our public meetings, to find out what was going on."

Ludicrously, Peter Francis has previously claimed that the "key success" of his work was discovering that the 1993 demonstration YRE co-organised to protest against the BNP's headquarters was going to be "far larger than thought" (Observer, 14 March 2010).

YRE had repeatedly told the police that the demonstration, following four racist murders within two miles of the BNP HQ, would be huge.

Fifty thousand people attended. We wanted to march peacefully past the BNP bunker. The police response was to refuse to allow us to march at all, and to carry out an incredibly brutal attack on peaceful young people using their democratic right to protest.

"Cameron has called for an immediate investigation into what took place, but all previous experience shows that an investigation by the police or individuals appointed by the government will result in another cover up.

"Francis himself says he wanted to report what he had done to the McPherson enquiry, but was prevented from doing so by senior officers.

"We demand a real democratic independent enquiry, made up of representatives from the trade union movement and the anti-racist and environmental protest groups that have suffered infiltration.

"Nor do we accept that this, as the Metropolitan Police have implied, is a thing of the past. Surveillance of peaceful protesters has increased dramatically in the recent period and police brutality, as shown by the tragic death of Ian Tomlinson, also continues.

"Today a new generation is becoming involved in campaigning against racism, and also against the government's austerity policies.

"New 'Pete Daleys' will be sent to infiltrate anti-racist campaigns and left-wing organisations to try and cut across protest.

"They will not succeed. But questions about whose interests the police act in, alongside demands for them to be made democratically accountable, will be an important aspect of future campaigns."

The print media didn't give anywhere near as much coverage, but the Guardian used the above press release in its live blog.