Link to this page: https://www.socialistparty.org.uk/articles/17014 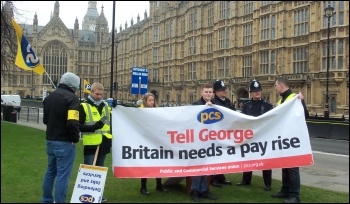 Sarah Sachs-Eldridge, editor of the Socialist

This week's government spending review was a continuation of the war waged against us - all of us not part of the super-rich 1%.

Tory Chancellor George Osborne announced a further £11.5 billion of cuts. By 2017-18 government spending is expected to be down a third from when the Con-Dem coalition took office.

The PCS union reports that more than £50 billion has been cut from workers' wages since the start of the recession.

New research shows that the economy is almost 4% smaller than its pre-crisis peak, even worse than previously thought. In reality this review was further proof that the Con-Dems' austerity measures are not delivering their promised results - far from it.

Austerity has failed to improve the economy and this review means it is set to last at least eight years instead of the initial promise of four - a further blow to those who hoped the pain would be temporary.

Osborne was nonetheless able to deliver this devastating blow with smug confidence because there is no opposition in parliament. Shadow Chancellor Ed Balls condemned Osborne for 'failing' but went on to emphasise his recent declaration that a future Labour government would use the Con-Dem spending plans as a starting point.

The need for a left electoral challenge has never been greater. The Trade Unionist and Socialist Coalition, involving the RMT trade union among others, is taking important steps to build this (www.tusc.org.uk).

Osborne's cockiness also derives from the failure of the trade union leaders to follow up the magnificent show of opposition to cuts in the 30 November 2011 public sector strike. That strike, and the growth in the trade unions that followed demonstrated the massive opposition to austerity that exists and the willingness to take action when a lead is given. 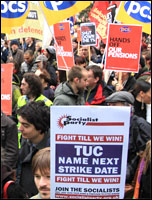 The 2013 spending review demands a determined response from our side. In September 2012 the TUC, the trade union leadership, overwhelmingly voted to consider the practicalities of a general strike but has not acted on that vote. Now it is urgent that the left trade union general secretaries meet to discuss what they can do to make the demand for a 24-hour general strike a reality.

A key place to help build this campaign will be the National Shop Stewards Network conference on Saturday 29 June (see www.shopstewards.net). The conference will be a forum for debate on a strategy open to trade union reps and all those fighting the cuts.

Councils will face a further £2.1 billion budget cut (10%) from 2015. The future of libraries (those that still exist), children's services, youth services, etc, hangs in the balance.

The choice is stark - councillors must either vote through this package of pain or vote no and link up with anti-cuts campaigns and trade unions to fight for the necessary funding for jobs and services. But where Labour councillors in Labour-led councils have voted against cuts they have faced suspension from the Labour Party if not expulsion.

TUSC calls for anti-cuts campaigners in the 2014 local government elections to stand as candidates targeting all those who wield the Con-Dem axe.

Increasing the delay for the newly unemployed to claim Jobseeker's Allowance from three days to seven will 'save' an estimated £245 million.

The reality is that most people wait an average of 16 days already. This will now get worse. Food banks fear more pressure on their limited resources while loan sharks salivate at the prospect of increased desperation. 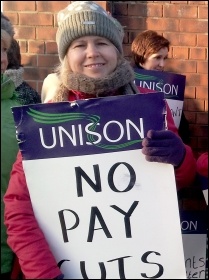 Those in work were not spared. Public sector workers will again have their pay rises limited to 1%. Osborne compounded that by ending automatic annual pay progression in the public sector.

Meanwhile social landlords can increase rents by the CPI rate of inflation plus 1% over ten years. The Joseph Rowntree Foundation reports that living costs have risen 25% over the last five years.

Recent figures showed that fewer state school students are attending 'elite' universities. How does the 'we are all in it together' government respond? £45 million cuts to higher education are predicted to hit the 'widening participation' funding.

Further Education funding will be reduced by £260 million in 2015/16. Student maintenance grants to help students meet the cost of living will be cut by £60 million in real terms that year.

This is part of a £15 billion sale of public assets - a transfer of ownership and control of public buildings, land and resources to private ownership.

Osborne also announced that winter fuel payments would be cut for overseas pensioners if they failed the 'temperature test', ie if they live in warmer countries. This is the thin end of the wedge to further attack universal benefits, aided by Labour's recent declaration that it also favours such cuts.

There were as always some 'winners' in this speech. The utterly disgraced 'intelligence' services are set to get a 3.4% boost.

'Putting lipstick on a pig' was how one Guardian commentator described Osborne's review. Alexander spoke of "the most comprehensive, ambitious and long-lasting capital investment plans this country has ever known".

But the Mirror reports that the lauded £50 billion spend on infrastructure for every year of the next parliament actually amounts to a real-terms cut of 1.7% on the previous 12 months.

As well as 'reheating' previous infrastructure announcements such as the Mersey Gateway, first approved by the Labour government in 2005-6, new projects may not develop in reality - of the 576 projects listed in the 2012 'infrastructure investment pipeline' only seven are completed and work has not begun on four out of five schemes.

It is argued that there is no public appetite for defending the welfare rights that have been fought for by generations of working class people.

Poll results are used to make this case. But while the right-wing media has had some influence on this, the campaigns in many areas against the bedroom tax show another picture.

Particularly in Scotland big meetings and demonstrations have been organised where the majority participating are not themselves directly affected by the cut to housing benefit.

The further cuts to benefits, in the previous plans such as the universal credit and the benefits cap, combined with welfare cuts of £4 billion including a new annual cap on housing benefit, tax credits and pensioner benefits (not including the state pension) announced in this review will see that mood of solidarity broaden and deepen.

Single parents of three year olds will be expected to actively seek work. As it is, an average of 45 people apply for every unskilled job vacancy showing the desperation that exists.

But Osborne called for measures to "help people stay off benefits, and help those on benefits get back into work faster" implying again that the unemployed bear the responsibility for their joblessness. What disgraceful rubbish! The figures show that there are not enough jobs out there.

The Socialist Party has been to the fore in the demand for major investment in a programme of socially useful job creation.

The Labour think tank Compass says: "We calculate that a £55 billion stimulus package of social and green infrastructure could generate up to one million jobs, £187 billion of additional GDP and almost £75 billion in terms of additional taxation." What an argument for a socialist plan!

But no such plan is forthcoming from Labour or the Con-Dems, nor from Ukip, who pose as anti-establishment but in reality have the same anti-working class policies as the Tories.

Ukip's recent electoral performance will have contributed to Osborne's divisive: "If you're not prepared to learn English, your benefits will be cut" line.

No question the money is there to provide decent living standards for all - just take for example the £850 billion lying idle in the bank accounts of big business.

They won't invest it as they see no easy route to profit but taxing it at 50% would be a good start to releasing funds for job creation.

This would need to be linked to other measures to move control over the economy into the hands of the working class and the majority.

As usual there was a further transfer of wealth towards the already disgustingly rich. The energy companies, exposed for price hikes and profiteering, are set to get a large public hand-out if they agree to invest in green energy over the next five years.

With carbon dioxide levels dangerously high the best way to ensure green energy would be to nationalise these companies under democratic workers' control and management and make a plan for green energy as part of a socialist plan of production to meet the needs of the overwhelming majority and the environment. That would be a spending review worth reading about.

Osborne should take note of the world context in which he gives his spending review. Not only is the economic outlook bleak with, for example, the plague of unemployment and the slowing of growth in China, but protest is increasing. 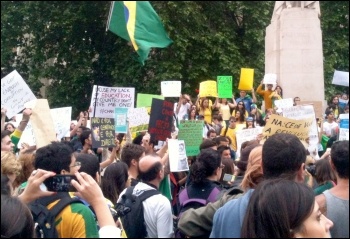 Brazilians in London protest on 13 June 2013 in support of the struggles in Brazil, photo H Pattison   (Click to enlarge)

In Turkey, Brazil, Egypt, and elsewhere mass movements are opposing austerity and capitalism's inability to provide democratic rights and a decent future for all.

The working class and youth in Britain, under these unrelenting blows of austerity are drawing certain conclusions about the need to fight, how to fight and who will fight for them, and will also join the battle.