From The Socialist newspaper, 3 July 2013

RMT reaffirms support for the Trade Unionist and Socialist Coalition 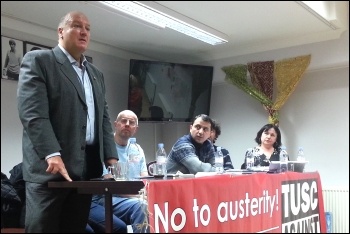 Transport union RMT delegates meeting at their national conference discussed the continued attacks on jobs, pay, pensions and the horrors of privatised and casualised transport industries.

Central to these problems is the need to build a political movement that will support workers' rights and provide a clear alternative to the failed policies of the current Con-Dem and previous Labour governments.

The debate this year on continuing support for the Trade Unionist and Socialist Coalition (TUSC) bought out many of these issues and overwhelmingly rejected the call to return to supporting the Labour Party.

Motions supporting TUSC from London Underground Engineering branch and Neasden branch were moved by Socialist Party member Lewis Peacock: "We don't have a voice, it is necessary to build and develop the Trade Unionist and Socialist Coalition."

Paul Reilly explained how support for TUSC was growing. He had stood previously as a lone candidate in Nuneaton, but twelve candidates stood this year. "The Labour council is making the cuts worse than the previous Tories. We didn't win, that will take time. We need an alternative," he explained.

Two delegates spoke against the motion, raising criticisms of TUSC's share of the vote and the obstacle of 'first past the post' to justify a return to supporting Labour.

These points were strongly answered by delegates such as Bill Rawcliffe, sacked Jarvis worker who had suffered at Labour's failure to save 1,500 jobs at Jarvis, when in government. "The Labour Party is dead as far as socialism is concerned, it is rotten to the core." Bill called on delegates to continue supporting TUSC.

An attempt was made to undermine the democratic credentials of TUSC and the involvement of RMT members by arguing against "a blank cheque to support TUSC candidates".

Speaking on behalf of the Council of Executives, Bob Crow reminded delegates that RMT support for TUSC candidates was subject to the backing of RMT branches and regional committees and that the Labour Party had removed all democratic structures to change policy.

As the general election approaches, renewed calls will inevitably surface over support for "lesser-evilism" and backing Labour.

The decisive vote of two thirds of RMT delegates showed that determined support continues for the building of a real electoral alternative that will "put forward the alternative to cuts and win the arguments" which will build for future electoral success for TUSC.

Reflecting the interest and support for TUSC, close to half the conference delegates attended the TUSC fringe meeting to hear Southampton rebel councillor Keith Morrell who later spoke to the full conference.

RMT reaffirms support for the Trade Unionist and Socialist Coalition

What the other half get paid

Model motion from the NSSN

Fighting back against hated bedroom tax

The Year of the Paper - boosting the sales of the Socialist