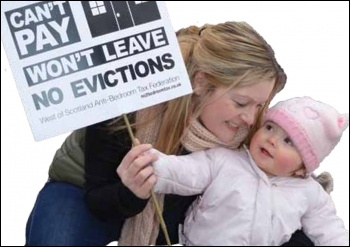 Welfare Minister Iain Duncan Smith recently declared the bedroom tax had proven to be "a great success" and was "finally shining a light on the failure of the last government to sort out the mess in social housing".

However a recent report from the National Housing Federation (NHF) has lifted the lid on the devastating effect that the bedroom tax is having on those affected on Merseyside.

In the 100 days since the implementation of the bedroom tax 14,000 households on Merseyside have been unable to pay their rent.

Furthermore, of the 26,500 households that are affected, more than half now find themselves in other forms of debt.

Included in the report are some figures released by the Department for Work and Pensions which say that, of the 660,000 affected nationally, 540,000 or 81% are taxed for one room.

The other 120,000 or 19% 'under-occupy' by two or more bedrooms. This of course leads to an increased likelihood of debt or arrears for the tenant.

The problem on Merseyside however is even worse. 11% more people than the national average have two 'spare' bedrooms and are therefore having their housing benefit cut by 25%. This means their chances of falling into arrears and debt are vastly increased.

In Liverpool two of the biggest housing associations, Cobalt and Riverside, have seen it affect them in different ways.

Cobalt housing, which is the primary landlord on one of Europe's biggest housing estates in Norris Green, has already run out of money put aside for securing its houses once tenants leave. This is because of the rising number of abandonments due to the bedroom tax.

On the Norris Green estate, which has 1,007 affected properties, more than 80% are three-bedroomed. This makes downsizing almost impossible, a situation which is much the same across Merseyside.

Riverside has taken a massive hit as more than 50% of those affected by the bedroom tax haven't been able to pay anything towards it.

It is estimated that this financial year, housing associations on Merseyside will collectively lose in excess of £22 million. This is money which could be used to build affordable social housing!

So for Iain Duncan Smith a "success" includes the suicide of grandmother Stephanie Bottrill and countless other people living in despair because of this hated tax?

Of the 26,500 households needing to downsize, only 155 have successfully done so, 14,197 are in arrears for the first time. Almost two-thirds of those affected on Merseyside are disabled.