Link to this page: https://www.socialistparty.org.uk/articles/17103 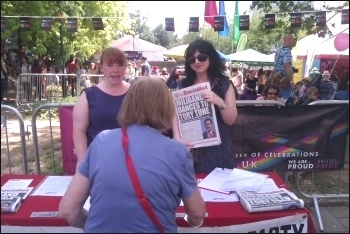 But that doesn't mean that people weren't up for serious political discussion. We set up a stall outside the entrance, campaigning against homophobic bullying in schools, and had an excellent response.

It's a campaign that has been taken up by many pressure groups, such as Stonewall, and LGBT charities, but the difference with our leaflets and petitions were the conclusions we drew.

We began by raising questions such as: Why is 'gay' still one of the most popular insults in schools? Why is sexuality seen as an appropriate thing to comment on and bully about? We then widened it onto other things in society, such as the horrendous and tragic death of a trans teacher this year who, although fully supported by children, parents and staff at her C of E school, was unmercifully bullied by national tabloids which led her to ending her life.

This led to discussing the recent stunting of Sex and Relationships education in schools and, although some local authorities provide good resources to support staff, many don't. 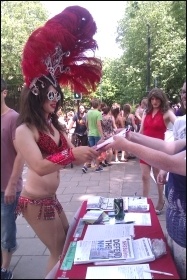 Many people said they would be interested in supporting the campaign further and provided contact details so we're hoping to follow this up with a meeting.

As socialists who believe in changing society, it is vital that we participate in these events, not only to raise our political ideas, but also to show our opposition to all forms of prejudice and discrimination and run campaigns which make a difference to people's lives now as well as in the socialist future.