Karl Marx: How to change the world 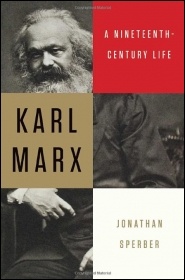 In this book Jonathan Sperber says he aims to place the great revolutionary thinker and activist firmly in his times.

In a comprehensive, readable biography, the University of Missouri's Professor of History does succeed in portraying Marx engaging with 19th century society and intellectual currents.

The juxtaposition of Marx the public activist, theoretician and private man are generally well-balanced in Sperber's hands.

But a central assertion of Sperber's - that Marx's ideas have limited application or are largely irrelevant to 20th and 21st century politics and society - is the book's fundamental flaw.

Today, more and more workers and youth look to Marx's ideas to find an explanation for what has gone so badly wrong with world capitalism.

Not long ago Marx's ideas were derided by most defenders of the profit system. Now this year Time magazine ran an article, entitled, 'Marx's Revenge: How Class Struggle Is Shaping the World'.

The unfolding drama of the Egyptian revolution, alongside other mass movements and strikes across southern Europe, Turkey, Brazil and elsewhere, show that Marx's writings on the role of the masses in struggling to change society, the international character of this process and the need for a revolutionary socialist leadership have never been more relevant.

Sperber's mining of the "total editions of Marx's and Engels's writings" does not cause fundamental re-evaluation of Marx the man or his ideas. Sperber generally adds to our knowledge more biographical details and colour.

These include Marx's complex relations with his parents; his Jewish heritage (his lawyer father converted to Protestantism to escape restrictions imposed upon Jews); doubts over the supposed aristocratic Prussian background of Jenny von Westphalen, Karl's future wife; and the long years of poverty the Marx family endured in London exile, which led to Karl and Jenny's chronic ill health and to the death of several of their children.

Sperber recreates mid-19th century Trier, where Marx was born on 5 May 1818. The town fell under Napoleonic and later Prussian rule, leaving the young Marx with deep antipathy to Prussia's military and aristocratic orders.

As a student in Bonn and Berlin, Marx was hugely influenced by the great philosophers, GWF Hegel (who developed the dialectical method but in an obscure way) and Ludwig Feuerbach (who espoused a materialist philosophy).

Sperber also emphasises the impact on Marx of radical followers of Hegel, like Eduard Gans and Bruno Bauer.

Marx became involved in the Young Hegelians movement, who held a radical critique of Christianity and, by implication, a liberal opposition to the Prussian autocracy.

Sperber highlights Marx's work as a radical journalist, which he began after the authorities denied him an academic career.

Marx became editor, in Cologne, of the Rheinische Zeitung, a liberal newspaper backed by Rhenish industrialists.

His incisive articles, particularly on economics, led the government to close the paper.

Marx moved to Paris in 1843, where he began writing for other radical newspapers and met Fredrick Engels, who became his lifelong friend and collaborator.

Marx was in contact with groups of émigré German workers and French socialist sects, trying to form a bridge between early French socialism and German radical Hegelians.

In 'The Economic and Philosphical Manuscripts' Marx championed 'communism', ie the collective ownership of the means of production.

Missing from Sperber's account is the vigour of Marx's revolutionary contribution to human thought. Expelled from Paris in 1844, Marx moved to Brussels where he elaborated in 'The German Ideology' what became known as the materialist conception of history.

Marx traced the history of the various modes of production up to capitalism and its replacement by communism.

In 'The Poverty of Philosophy', Marx broke with the most influential French socialist of that period, Proudhon, who opposed political action by the working class and espoused utopian socialism.

On the eve of the 1848 revolutions that spread across Europe, Marx and Engels were commissioned by the Communist League to write the 'Communist Manifesto'.

This brilliantly set out their view of the communist movement's methods and aims. It explained the materialist conception of history; that human societies progress through class struggle.

But a new socialist revolution would see the working class act as the "grave diggers" of capitalism, ushering in a new society, based on need not profit.

Early in 1848, Marx moved to Paris, where the revolutions broke out, and then returned to Cologne where he founded the influential Neue Rheinische Zeitung, which presented a radical democrat line against Prussian autocracy.

Marx and Engels consistently advocated tactical and critical support for specific actions of the 19th century's rising capitalist class against reactionary autocracy, while calling for the political independence of the working class.

The Prussian counter-revolution led to Marx's expulsion from Germany and to exile in England in 1849.

He rejoined the Communist League and wrote important pamphlets on the 1848 revolution in France ('The Class Struggles in France' and 'The Eighteenth Brumaire of Louis Bonaparte').

In preparation for renewed revolutionary developments, Marx devoted himself to a study of political economy to determine the causes and conditions of capitalist crisis.

It was not until 1867 that Marx could publish the first results of his work in volume 1 of Capital, which concentrated on the capitalist process of production (volumes 2 and 3 were published posthumously by Engels).

Marx laid bare the nature of capitalist crises which, he explained, were intrinsic to the system. Marx was writing when capitalism was still in its relative youth.

In our epoch, the system has exhausted itself. The productive forces have been strangled by the barriers of private ownership and the nation state.

One reason why Marx was delayed in his work on 'Capital', (his initial plan included separate volumes on the state, international trade, and the world market and crises) was that he gave so much time to the International Working Men's Association (1864) - the First International.

Marx and Engels played a leading role politically and organisationally in this formation. Sperber gives a lively account of Marx's struggle against the influence of Bakunin and the International's anarchist wing, where Marx insisted upon the working class acting as the main agent of socialist change.

During this period, Marx wrote 'The Civil War in France', which drew important lessons after the bloody defeat of the 1871 Paris Commune.

Not least, Marx analysed the role of the capitalist state, which has strong echoes today in Egypt.

The last decade of Marx's life saw a steady decline in his health and the death of his wife and a daughter.

Yet he developed his theories and commented substantially on contemporary politics. Although he strongly criticised the Programme adopted by the unification congress (1878) of German social democracy ('Critique of the Gotha Programme'), Marx was encouraged by the spread of socialist organisations throughout Europe, and by his ideas' growing influence in the socialist movement.

Throughout his comprehensive account, Sperber presents Marx's ideas alongside opposing views, from Marx's time and since.

For example, Sperber repeats the old myth that Marx's ideas were distorted and misrepresented by Engels, which "were then absorbed by an entire generation of socialist intellectuals and political leaders".

He says Engels' book, Anti-Dühring, which refuted the arguments of an economics lecturer who denounced Marx's ideas, was "a nasty and unpopular polemic" and wrongly presented Marx's ideas as a "positive science".

But Engels was never a crude "positivist" - as Sperber infers - who argued that the development of science meant philosophy was redundant and had lost all intellectual relevance.

On the contrary, Engels' (and Marx's) dialectical method led them to counsel that findings of even brilliant natural scientists will be limited to the extent that they lack philosophical understanding.

Marx and Engels' voluminous correspondence shows intimate intellectual and political collaboration from 1844 until Marx's death in 1883, with only secondary differences expressed.

Engels published Anti-Dühring with Marx's encouragement and Marx even wrote the section on the economy.

Not all that Marx and Engels wrote was correct in every detail or has always been confirmed by events.

Yet their contribution to our understanding of society has been immense and continues to be so. Not only that.

Marxism is a guide to action. As Marx famously remarked, "Philosophers have only interpreted the world, the point, however, is to change it".

A comprehensive Marx and Engels booklist is available from Socialist Books

Marxism in Today's World, an excellent demonstration of Marxism's relevance to today's complex society, is now available in a new edition with a new introduction.

One Housing support workers - more determined than ever!