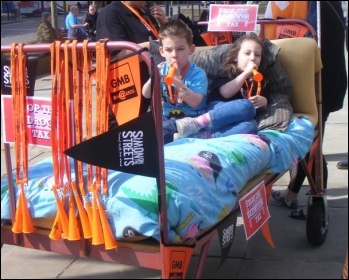 Last month the Bolton at Home housing association became the first in the country to introduce a policy of "no homelessness" for those tenants in arrears because of the bedroom tax.

This step forward is thanks to an excellent local campaign, led by people affected by the tax and supported by the local trade union movement.

Janet Bryan, Unison executive member and steward in Bolton at Home, speaking in a personal capacity, told the Socialist: "It is inspiring to see those affected by the bedroom tax getting together, organising meetings across the town and lobbying Bolton council and the housing association at every opportunity. The trade union movement in Bolton is fully behind the campaign".

While the move to a "no homelessness" policy must be applauded, we do not believe that it goes far enough. To be considered for alternative housing under the new policy, tenants will receive a "one-time only" offer of a property.

Alarmingly, such an alternative could be in the private rented sector, which could leave tenants at the mercy of unscrupulous landlords charging sky-high rents.

The Bolton at Home joint shop stewards committee has agreed a motion calling on the housing association to announce a policy of "no evictions".

And if union members feel unable to either process documentation that leads to or assist in the eviction of a Bolton at Home customer who faces eviction solely for bedroom tax arrears, they will get the full backing and support of their union locally.

Keep up the pressure

Clearly the pressure needs to be kept up on Bolton at Home and the Labour councillors that sit on its board. With the Labour Party apparently now opposing the bedroom tax, Bolton at Home should be passing a "no evictions" policy.

Councils should also refuse to evict, and Labour leader Ed Miliband - if his party really means it - must pledge that an incoming Labour government would repay all money lost as a result.

Local campaigners are clear that the Bolton at Home policy does not go far enough and they want to keep piling on the pressure. That is why they have organised a protest and march in Bolton on Saturday 14 September.

Kieran Grogan (pc), Unison steward in Bolton at Home, said: "It is important that residents of Bolton, whether affected by the bedroom tax or not, turn out in big numbers and join the protest on Saturday. Tenants, trade unionists and residents of Bolton united can axe the tax."