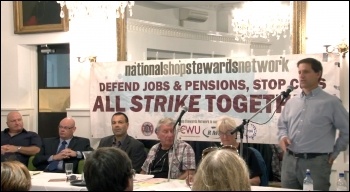 A decision as to whether to include Wales in the regional action is still to be finalised.

A one-day national strike is scheduled before the end of the autumn term, likely to be towards the end of November.

Now every school rep and Local Association [NUT branch] needs to urgently get this news out to members and build for the firmest action possible on the two regional strike days.

As I have consistently argued on the executive ever since Education Secretary Gove announced his performance-pay attacks back in December, the intolerable pressures in most schools mean that teachers will overwhelmingly support a clear call from their unions to take action.

The solid strike across the North West on 27 June confirmed that. Now NUT and NASUWT members in the rest of England have their chance to build on that success in the two regional strike days in October.

We must then aim for a complete shutdown of schools - and more besides if we can persuade other unions to join with us - when we take national strike action in November.

We must also make clear to Gove, and to teachers, that this time we're not just going to make a protest and then step back.

If Gove refuses to retreat, we have to announce a further calendar of action for 2014, perhaps stepping up to a two-day national strike.

The harsh reality of Gove's performance-pay regime may quickly be brought home when dates start being set for appraisal review meetings.

Some teachers will again be under pressure to accept objectives linked to unachievable targets. Under some pay policies, 'failure' could mean no pay progression in 2014.

If we end up trying to defend teachers just through individual pay appeals, we'll collapse under a mountain of casework.

That's why some Associations, including my own in Lewisham, are preparing for sustained local action over new pay policies, alongside the calendar of national action.

With a bold plan of action, reaching out to parents too, we can defeat this divided government.

Saturday 14 September: NUT/NASUWT rallies for education, 11am in London and Nottingham.

Saturday 21 September: NUT/NASUWT rallies for education, 11am in Cambridge and Exeter.