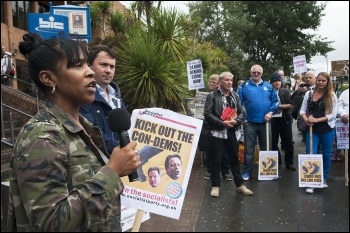 Candy from One Housing speaking at the NSSN lobby of TUC, 8.9.13, photo Paul Mattsson   (Click to enlarge)

One Housing Group (OHG) workers blowing vuvuzelas and whistles and waving Unite flags and placards made sure that no-one in Chalk Farm, north London, was unaware of their latest five day strike.

The strike was called as management refused to back down over their plans to slash frontline workers' wages by up to 25%, meaning some workers losing up to £8,000.

Unite housing workers' branch LE1111 has seen membership grow among OHG workers as a result of the fighting stand taken by the union.

This was reflected by an increased number of workers out on strike and an increased determination to stop management's attacks.

Why does a not-for-profit organisation, which has huge reserves, is making money and has funding secured for years to come, cut wages by £8,000? TThe answer is that the bosses don't care about the service. They only care about bonuses and their own pay packets.

Despite a real downpour on the last strike day the mood was not dampened. One striker who was preparing for future action said they would probably have to have picket lines in the snow.

The picket line was also visited by many trade unionists and other supporters bringing messages of support.

These included Steve Hedley, assistant general secretary of the RMT, who raised the desperate need for a new mass workers' party.

This was met by loud applause, as were the comments of Helen Pattison, Sick of Your Boss campaign organiser, when she spoke of the campaign against zero-hour contracts.

Rob Williams, bringing a message of support from the National Shop Stewards Network, also received loud cheers when he spoke about the need for a one-day general strike.

The message from this latest set of strikes, this is now the eleventh strike day, is that the workers backed up by their union are even more determined to win this dispute and stop these massive attacks going through.