From The Socialist newspaper, 2 October 2013 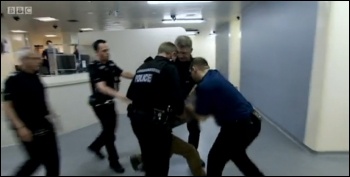 Locked up for being ill: BBC Panorama, photo BBC   (Click to enlarge)

A recent BBC Panorama episode, 'Locked up for being ill?', looks at the growing police involvement in supporting people with mental health problems. It showed people with severe mental illnesses kept in cells for up to 22 hours while police officers made repeated phone calls to the mental health unit who didn't respond.

Police complain about the waste of their time, as many people they take in have to be watched so carefully. One police officer says he spent hours trying to calm a woman with mental health needs, with no idea if it helped as he hasn't had the appropriate training.

The first half of the programme was a huge attack on mental health services until the police commissioner says: "there are not enough beds for the patients that we present to mental health units". Many adults with mental health problems in prisons are under-supported because of the stretched service.

Then the programme plays with the possibility that the services involved are stretched by cuts, causing further problems of "congestion" in the system. One man with mental health problems is ready to leave his bed on an adult acute ward but can't do so, as the service can't find him accommodation. Beds available in these services have dropped by 38% in the last five years.

The government is attacking the NHS, and other services the people portrayed by Panorama rely on. But police and mental health service professionals in this programme blamed other services for the problems and tried to find a solution within current funding levels. None of them said that if more people need the support of mental health units, then more funding is needed for all services needed for recovery.

Attacks to one service flood other services with problems. We must fight all the cuts to services. We need adequate funding for mental health services, housing for those able to leave, jobs and support for those not ready to return to work, and an end to attacks such as the bedroom tax which have led to people taking their own lives.