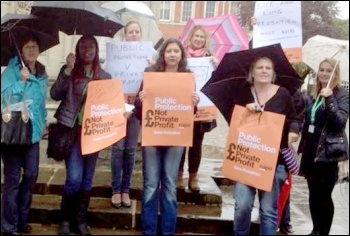 Delegates and visitors gather in Llandudno this week for the most crucial Annual General Meeting in Napo's 101-year history.

With the result of the industrial action ballot due to be announced on 18 October, a big 'yes' vote can be a springboard for the next stage of our campaign to defeat the government's privatisation plans.

On 9 October our campaign received a boost with a 300-strong parliamentary lobby that filled two large committee rooms and stunned MPs from all parties with its passion and vibrancy.

On the same day Justice Secretary Chris Grayling was confronted by Napo members outside the World Conference on Probation at the Queen Elizabeth II Centre, just across the road from Parliament, demanding answers to questions about public safety.

News about yet more mess-ups by contractors G4S, this time at the privately run prison HMP Oakwood, gave added weight to the chant "failing Grayling!" The beleaguered Grayling was later spotted skulking along the corridors of power trying to avoid a confrontation, but we are not in the mood to let him off the hook.

Napo members are realistic enough to know that privatisation won't be defeated by lobbying alone. We have to turn a 'yes' vote into decisive action that can stop the government in its tracks.

Already, the Ministry of Justice's (MoJ) misnamed Transforming Rehabilitation (TR) programme is behind schedule and will need staff cooperation to see it through.

Strike action, combined with non-cooperation with TR processes and 'working to rule', can cause massive disruption and force Grayling to abandon his plans.

Newly elected Napo general secretary Ian Lawrence and his team should be commended for their independent stand during national negotiations, but it is now time for Unison and GMB, representing significant numbers of lower grade, administrative and Community Payback staff, to join the fight.

The end of the MoJ's bogus 'consultation period' on 21 October should be the trigger for industrial action ballots in our sister unions as a precursor to joint action.

A strategy to win will need coordinated action across the service, linked to action already taking place by workers in other sectors such as teachers, firefighters, civil servants and postal workers.

The 60,000-strong demonstration in defence of the NHS outside the Tory conference shows the potential for harnessing the widespread anger to inflict a mortal blow against this government.