From The Socialist newspaper, 30 October 2013

Join the day of action on 5 November 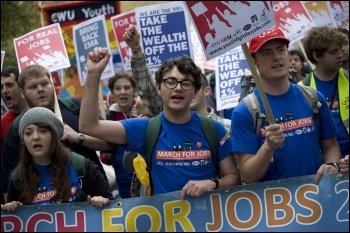 The CBI, the organisation representing Britain's bosses, touts zero-hour contracts as the solution to the youth unemployment crisis.

Enthusiasts such as ex-Apprentice contestant Katie Hopkins have revealed what big business is really thinking - if you're sick, pregnant, or disabled, you don't deserve work.

It is no coincidence that unemployment has (according to official statistics) dropped slightly below two and a half million when 5.5 million are employed on zero-hour contracts.

You can be on one of these contracts and receive no hours whatsoever, week after week, but still not be included in the unemployment statistics - it's a dream come true for establishment politicians!

But zero-hour contracts can be beaten - the recent victory of Hovis bakery workers striking against the use of them shows just that.

On 5 November Youth Fight for Jobs, through our initiative, Sick Of Your Boss?, will organise protests, stunts and occupations against Sports Direct and any zero-hour employer that thinks they can get away with giving us nothing. Join us for the next wave of action to reverse the race to the bottom.

See youthfightforjobs.com for details of what's happening near you and reports of campaigning

Are you sick of your boss?

Brazil: "Rio, a showcase for the world"

Sexism in the music industry exposed