From The Socialist newspaper, 13 November 2013 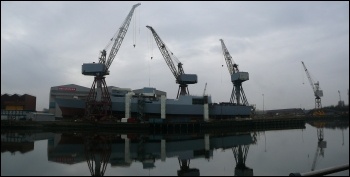 The shocking news that 1,775 jobs will go at BAE in Glasgow, Fife, Bristol and Portsmouth has angered thousands of workers. The end of shipbuilding in Portsmouth after 500 years has provoked enormous rage.

At very short notice, over 200 trade unionists and community activists rallied in solidarity with workers at the Portsmouth BAE shipbuilding yard on Saturday 9 November, getting excellent support from the public.

Portsmouth's BAE workers and their supporters have responded with the call for a united campaign with workers from Glasgow, Rosyth, and Filton.

A statement from BAE workers, issued by Portsmouth Trades Council said: "We should not follow the lead of local politicians who argue to cut jobs in Scotland to save jobs in Portsmouth. We should fight to save all shipbuilding jobs, wherever they are. BAE and the government can be put under pressure to keep all the shipyard jobs, if there is a concerted campaign."

Messages of support and invitations have been sent to unions at all yards affected to join the demonstration in Portsmouth on Saturday 16 November to show that solidarity will win.

For every job lost in this industry, jobs will go in the supply chain and local communities. It will suck over £25 million in lost wages out of Portsmouth and pile on equal misery in Scotland and Bristol.

This is a highly skilled workforce, to lose these skills is the worst kind of industrial vandalism by this government. The potential could be used to harness these and continue civilian maritime production and to diversify.

Enormous profits have been piled up by BAE running tax-payer financed government contracts. While workers get P45s, top BAE executives get huge pay and bonuses.

If BAE is prepared to run down this industry, it is the bosses who should be sacked. BAE should be nationalised and production planned with the involvement of the unions and local communities.

To succeed, a determined campaign needs to be built. Many workers will ask how this government of millionaires can be defeated. Last Saturday showed how much support BAE workers have. This could be mobilised behind united strike action at all yards to put huge pressure on the government.

Shipyard workers are not fighting alone. Recent strike action by teachers, university workers, probation officers and firefighters has had strong support. All workers could be brought together in a united campaign to save all jobs under threat in the public and private sector.

The same day these job cuts were announced, 500 jobs went down the road at the pharmaceutical company Novartis in Horsham. Events are crying out for the TUC to name the date to strike back against austerity, for a 24-hour general strike.

TUSC: We need councillors who refuse to implement cuts

A small victory for democratic rights

Russell Brand - reasons to be cheerful

Portsmouth: 'Save the yards, nationalise'