Link to this page: https://www.socialistparty.org.uk/articles/17882 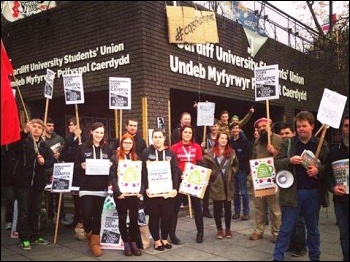 Several thousand students gathered today outside the University of London Union building in Malet Street to protest against last week's police brutality and repression by management.

Members of Socialist Students brought along a small stage and sound system, so were able to lead the crowd in chants and speeches. They are demanding that the NUS calls a demonstration and are calling on trade unionists to join the protests and help with defence.

The students moved off to march around the Bloomsbury campuses, and so far today have NOT been chased by cops - so are succeeding in defending their right to fight. Cops off campus!

Banner drop at the Leeds protest   (Click to enlarge)

Following the vicious crackdown on student protests last week, students in Leeds held a protest outside Leeds University Union in solidarity with student protesters around the country, demanding that the universities in Leeds don't call police onto campus to deal with protesters here in similar fashion in the future.

Around 50-60 attended the protest, with some UCU and Unison activists attending in support. Iain Dalton, Yorkshire and Humber TUC Youth Forum convenor argued for the need for workers to support student activists, particularly when the repression they have faced has been a result of supporting university staff taking strike action last Tuesday.

Other speakers outlined the details of the onerous bail conditions students have been given including not being able to gather as part of a group of four or more. Sanaz Raji from the Justice4Sanaz spoke about the crackdown international students including herself have faced, and the intimidation that protests in support of her reinstatement at Leeds Uni have faced. 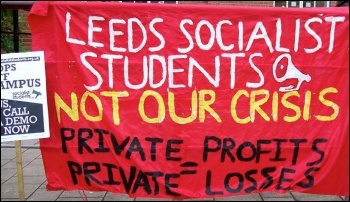 Mary Finch from Leeds Uni Socialist Students welcomed NUS's support for today's day of action, but argued that NUS needs to go much further and call a national demonstration to link up campaigns against repression of protests and also the anti-cuts issues up and down the country that protesters were taking up, including proposed cuts to the School of Healthcare at Leeds University. The Socialist Students leaflet outlining this strategy went down well, as did our '#copsoffcampus' badges.

To show support for students and protesters brutally attacked by the police last week Cardiff students joined the national day of action on Wednesday, with a demonstration outside Cardiff university.

Nearly 40 students attended the 'cops off campus' protest from two different universities and a local sixth form, to show their anger at the attack on the right to protest.

A letter condemning the violence and demanding that the NUS call a national demonstration was signed by many on the protest including student union officers.

Many attending had already demonstrated against tuition fees and joined lectures and staff on demonstrations and picket lines in the ongoing pay dispute.

Students at Cardiff university can see that there is a fightback in education against cuts and privatisation, many throughout the year have come to Socialist Students meetings and campaigned to build the Socialist Students society.

The society signed up new members at the protests and had a meeting the same day to discuss the London protests and repression of uprisings internationally. 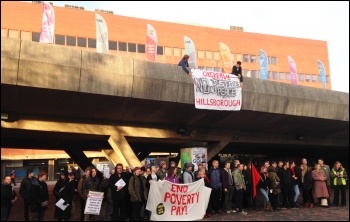 Both societies protested outside Sheffield University's students union building alongside other left groups in solidarity with the students unjustly suspended at Sussex and against the repression of the student movement across the country.

The protest also addressed the police brutality and cover-ups which Sheffield saw in the 1980s in the form of the battle at Orgreave and the Hillsborough disaster, as a banner was unveiled outside the students union.

A short march to the building which houses many of Sheffield University's senior management staff also took place.