Link to this page: https://www.socialistparty.org.uk/articles/17903

Care UK - profiting at the expense of the vulnerable 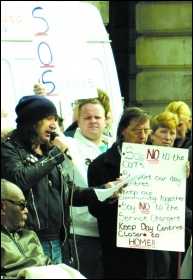 Support staff in Doncaster received an early Christmas present on 16 December in the form of a letter outlining the 'proposed changes to service' by their new employer Care UK, regarding its recent acquisition of a supported living service for vulnerable adults with learning disabilities.

These include NO enhancements for working weekends, nights or bank holidays (which in itself will mean a pay cut averaging £400 a month due to the fact we provide a 24/7 service), and only BASIC annual leave entitlements, statutory sick pay and statutory maternity pay.

Since this company took over in September we have seen staff teams who have worked together for decades being turned over overnight, staff already seeing a drop in wages due to the fact they're just 'too expensive' to put on certain shifts and record numbers of staff applying for bank contracts with the health trust just to keep their foot in the door. Happy Christmas eh?

This is not to mention the effect it has had on our service users - vulnerable people who have put their trust in us, relying on our familiar faces and the support we give to them. A lot of our service users are on the autistic spectrum and when 50% of a staff team is forced to leave out of fear of not being able to provide for their own families, issues will arise.

I spoke to a colleague in the day care service and she informed me that attendance for a particular service user has dropped from every morning to three, maybe four, times a month. Nowadays it seems he is afraid to leave the house, with the bricks and mortar around him being his only constant.

It is inhuman to think that you can care for someone for the best part of a decade and not love them. Sadly that is the emotional blackmail that courses through the very veins of the care industry. Choose between the person you have cared for, worked with, rehabilitated; and keeping a roof over your family's head.

The mood in the homes is not anger, it's upset. We are carers, not fighters. But forced, we will stand ground and never accept the terms imposed upon us.

Unison balloted its members on 10 December for strike action and will know the result later next week.

This version of this article was first posted on the Socialist Party website on 19 December 2013 and may vary slightly from the version subsequently printed in The Socialist.