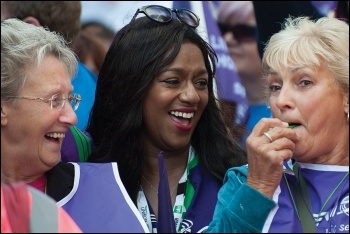 A 24-hour general strike would shift the balance of forces, photo Paul Mattsson   (Click to enlarge)

On 6 January Tory Chancellor George Osborne turned Blue Monday into Black Monday. The dreaded return to work for many was made much worse by Osborne's confirmation of plans for another £25 billion of cuts.

December was full of government claims of economic recovery in Britain. But 13 million of us had to pay for Christmas on credit because wages are low, bills are high and most rents are rising. In some areas the size of foodbank parcels was reduced to feed the increased numbers.

The super-rich then received a generous January bonus from the government as Osborne intends to limit himself to chiselling these latest cuts out of the poorest sections of society - yet again. £12 billion will be cut from the welfare budget.

Plans to cut housing benefit to the under-25s have been floated. Young people have been a key target for the Con-Dems' cold cruelty since 2010.

Osborne's speech has been seen as the Tory election campaign launch for the 2015 general election. Austerity is unpopular but there is no voice in parliament which opposes it. Working class people cannot turn to Labour for an alternative to these cuts.

Shadow Chancellor Ed Balls grabbed the opportunity to re-commit Labour to the Coalition's spending plans for 2015-16.

When pushed on how a future Labour government would balance the budget, as Balls has pledged to, all he could offer was ending universalism in benefits for pensioners.

With a million pensioners staying in bed longer to avoid running up expensive heating bills, limiting access to the winter fuel allowance will result in more deaths.

On 22 May we'll get the first opportunity to punish the Con-Dems at the ballot box. The Trade Unionist and Socialist Coalition (TUSC, www.tusc.org.uk) is aiming to stand 625 no-cuts candidates to kick out austerity.

Why don't you consider standing? Or get involved. Click here for details of the TUSC conference.

In what's been called his 'unhappy new year' speech, Osborne called 2014 the 'year of hard choices'. The huge potential strength of workers could force the Con-Dems to make some very hard choices - to back off from austerity.

A 24-hour general strike would shift the balance of forces and build the confidence of the working class to resist.

Every week of 2013 the Socialist reported how workers have shown time and again that when a serious lead from the unions is given they will step up. This year the campaign for the TUC to call a 24-hour general strike continues to be urgent.

The best response to Osborne's speech is this New Year's resolution: build the fightback in 2014!