Cabinet papers reveal truth about Thatcher's war against the miners 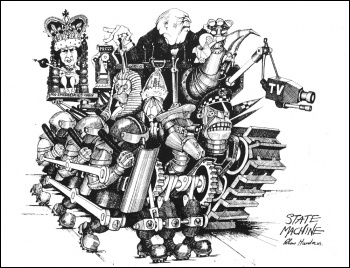 After 30 years of gathering dust in the National Archives, the declassification of secret government files has revealed how far Margaret Thatcher and the Tory government went to ensure defeat of the 1984-85 miners' strike.

Among the chilling revelations are how they considered declaring a state of emergency and using troops to move coal, despite official government denials about their use, and material exposing the undeclared civil war the ruling class conducted against Thatcher's 'enemy within'.

Although much of the 'new' material has slowly leaked out in recent years, or was widely suspected in advance of its release, these papers significantly confirm how close Thatcher and the Tories came to defeat in July and October 1984.

It underlines that if the Labour and trade union leaders had given full support to the miners, then at least a partial victory would have been won that could have helped stem the tide of job losses and closures.

The Socialist Party's 2004 book on the strike, A Civil War without Guns, details much of what has been confirmed in the Cabinet papers - particularly the wobbles that Thatcher had around the time of the proposed docks strike in July and the Nacods [the colliery deputies and under-officials' union] ballot for action in October.

Yet, as Thatcher wobbled, the book also showed that it was the right-wing leaders of the trade union movement and Labour leader Neil Kinnock, who came to her aid and allowed her to gain ultimate victory.

These new documents further confirm how historically justified the miners' struggle was to defend their communities.

Britain's coal industry would have been slashed to half its former size, at a stroke in 1984, had they not conducted their strike.

The newly released papers conclusively confirm the existence of a conspiratorial plan to close 75 pits and axe more than 60,000 jobs in the industry, something vehemently denied at the time. The Tory government and National Coal Board (NCB) always claimed that only 20 or so collieries were to close - an argument desperately repeated by the media and right wing in the labour movement to undermine the miners' struggle.

NUM leader Arthur Scargill, the majority of the miners, and their supporters, knew that the government and NCB were lying, that the 'economic' justification for pit closures was rigged, and that the real number of job losses and pit closures was going to be far higher if they didn't fight in 1984.

Critics of Scargill and the miners, like multi-millionaire former Labour leader Neil Kinnock, also choose to forget that the spark that started the strike at Cortonwood, South Yorkshire, in March 1984 was because the NCB had blatantly flouted the nationally agreed pit closure procedure.

This was a clear signal that the NCB - on behalf of the government - would move to a rapid downsizing of the industry on a scale unseen before. It also showed that the traditional negotiation platforms open to the unions were going to be brutally shunted aside.

While it may not be such a great revelation that Thatcher lied over the closure plans and other matters, the extent of the conspiracies and 'abuse' of power conducted by the prime minister and her allies exposed in these official documents is breathtaking.

It confirms the malicious cruelty of the British ruling class, epitomised by the former Tory chancellor during the strike, Nigel Lawson.

He said that preparation for the strike - in effect to de-industrialise Britan, because of the fear of trade union militancy - was "just like rearming to face the threat of Hitler in the 1930s".

It was always widely suspected that NCB chairman MacGregor and Thatcher were colluding with senior politicians from all sides, civil servants, right-wing union leaders and media bosses to demonise the miners and win the dispute.

Now it is there on record of how far they went - a black and white confirmation of the preparations today's activists seriously need to make to win future workers' struggles.