At least 6,000 Russian troops have taken up positions throughout the Crimean peninsula, formally an autonomous republic of Ukraine.

The Russian regime claims it took this action following a request from the Crimean government to intervene in defence of the rights of Russian citizens.

The Kremlin made clear that it may send troops into other parts of the Ukraine, if the rights of ethnic Russians are "harmed", although Putin said this will be "a last resort".

The Putin regime was handed an excuse for its actions by the new Kiev government's highly provocative and immediate decision to reduce the language rights of the Russian population and other minorities.

A co-founder of Svoboda also heads the National Security Council and one of his deputies is head of the fascistic paramilitary Right Sector.

The interior ministry has said it will integrate the militia set up by the Right Sector into the police force.

The Russian Duma rushed through a new law to allow Russian passports to be issued to any ethnic Russian living in Ukraine.

It also passed a law allowing any region of another country to be annexed to Russia if the government of that country is deemed "unstable".

The Putin regime's military moves follow the ousting of President Yanukovych and the formation of a pro-western regime in Kiev.

The western powers' reckless meddling in Ukraine and the response of Russia has created the most serious military crisis in Europe since the Russia-Georgia war.

Features of a revolution

The last weeks initially saw a mass movement against the corrupt and authoritarian Yanukovych regime and the oligarchs.

This movement had features of a revolution, displaying the power of the masses, which led to the disintegration of the Yanukovych regime and the state apparatus.

But in the absence of powerful workers' organisations, reactionary opposition politicians, hard-line Ukrainian nationalists and the far-right Svoboda party and Right Sector were able to dominate the opposition, arousing deep suspicions and fears among the ethnic Russian population.

Yet the US, when its key imperialist interests are at stake, carries out military interventions into other "sovereign" territories.

The military superpower invaded and occupied Iraq and Afghanistan, at a huge human cost.

Despite the western powers' howls of rage over Russian forces seizing control of Crimea, Nato forces occupied Kosovo after arming and militarily supporting the Kosova Liberation Army's conflict with the Serbian regime in 1999.

Faced with Russian troop movements in Crimea, western imperialism finds itself militarily paralysed and divided over what action to take.

European governments are resisting serious sanctions. Many European countries rely heavily on trade with Russia (from where Germany gets 40% of its gas and oil) and are reluctant to take action that worsens the EU's economy.

A photograph of a secret document detailing British cabinet discussions embarrassingly revealed a proposal to "not support, for now, trade sanctions... or close London's financial centre to Russians".

The new Kiev government already has severe problems on its hands that will affect the rights, not just of Russian speakers, but all workers in the Ukraine.

The economy is on the brink of bankruptcy and the government has announced big cuts in state expenditure.

Any financial package it receives from the west is already accompanied by demands for harsh austerity measures.

To mobilise support for Russian military intervention, demonstrations were organised in several Russian cities, including 20,000-30,000 in Moscow.

The Putin regime is exploiting the real concerns of Russians, as well as promoting crude "patriotism" fuelled by anti-western feelings, to support its intervention.

Many Russians are, of course, genuinely concerned about the plight of ethnic Russians in Ukraine, given the thoroughly reactionary character of the new Kiev regime.

The Russian regime's military intervention is no more motivated by concern for the well-being of ethnic Russian workers than the western powers' cynical manoeuvres are intended to aid the Ukrainian-speaking working class. 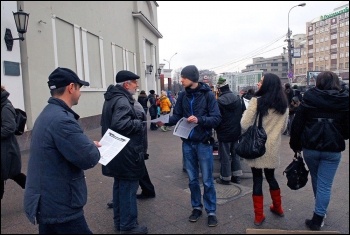 CWI activists in Russia distribute leaflets explaining why they oppose intervention into Ukraine, photo by CWI   (Click to enlarge)

The Kremlin is taking military action out of grave concerns that a pro-western, pro-Nato regime is now in place in Kiev, on Russia's western borders, threatening Russian imperialism's vital geo-strategic and economic interests.

Putin's intervention into Crimea aims to shore up Russia's vital 'near abroad' and is in keeping with his ambition to try to restore the power and influence of the Russian elite who, after the collapse of the former Soviet Union, transformed themselves into capitalists.

In response, the EU and US threatens economic sanctions and Nato sabre rattles. The Western-backed Ukrainian regime has ordered full mobilisation to counter the intervention. The working people of Ukraine will pay dearly for any escalation of the conflict.

Socialists call for an end to all imperialist interference and military interventions throughout Ukraine.

These reactionary forces threaten to escalate the crisis into a war. This raises the terrible prospect of ethnic and national conflicts in the region, similar to the bloody wars that dismembered Yugoslavia in the 1990s.

The CWI in the region calls for the creation of anti-war committees in both Russia and Ukraine, including Crimea.

Democratically-organised committees can carry out cross-ethnic defence of any groups under attack by the far-right or Russian chauvinists.

Just a week ago, an opinion poll said that 73% of the population were then against Russia intervening.

On Sunday 3 March, hundreds were detained by police, including CWI members, for taking part in anti-war protests in different cities.

However Putin's chauvinist policies, "protecting ethnic Russians" in Ukraine, will most likely enjoy a temporary boost of support at home.

With the fall of President Yanukovych, the Russian elite were dealt a severe blow. Russia lost significant economic interests and what influence it had over the Kiev government.

As it did in South Ossetia before the war with Georgia, the Russian regime stepped up its campaign in "defence" of ethnic Russians in the Ukraine.

Last weekend saw tens of thousands on pro-Russian protests in the port city of Sevastopol, the base of Russia's Black Sea fleet and elsewhere in Crimea and east Ukraine, including Donetsk. "Self-defence" groups, supported apparently by Moscow, were set up, and seized government buildings.

Local and regional leaders were swiftly replaced with pro-Russian figures and dates set for referendums on secession.

Without an independent workers' movement, there is a danger that protests will increasingly take on divisive, ethnic features.

The mobilisation of up to 130,000 Russian troops on the Russia/Ukraine border quickly followed.

Although working people in the east are fearful of the new Kiev regime's policies and far right involvement, many are also worried that Russian intervention in the Crimea could develop into a war across Ukraine and even the region.

Many Eastern cities saw small but still significant demonstrations against wider conflict. Russian authorities say that ethnic Russians are fleeing the region into Russia and over 140,000 have applied for asylum in Russia.

The Crimea should have the right of self-determination, if it so desires. The region has long been the pawn of ruling elites and big powers' intrigue.

In 1944, Stalin forcibly removed the peninsula's Tartar population. In 1954, Soviet leader Khrushchev handed over Crimea and its people to Ukraine, without any consultation.

Neither were the peoples of the former Soviet Union consulted when its regional leaders decided to break it up in the early 1990s and seize power in their own republics.

The CWI supports the right of the people of Crimea to freely and without any hint of coercion decide their future, be it enhanced autonomy or independence.

A democratically-convened constituent assembly, representing all sections of the working class, would ensure a referendum on Crimea's future is overseen by elected committees of working people.

The rights of the region's 300,000 Tartars and all other minorities need to be fully guaranteed, including their language and religious rights.

This will not be possible under capitalism, with its poverty, joblessness and exploitation and due to the competing elites playing the 'divide and rule' card.

Only a workers' government, replacing rotten capitalism with a society run in the interests of the working masses, can ensure the rights of all nationalities and minorities are protected, as part of a federation of socialist states in the region.

But what is happening now will not lead to genuine self-determination; it will only mean that Crimea becomes a Russian protectorate, like South Ossetia, or, even worse, an occupied region with a dictatorial ruler, like Chechnya's Kadyrov.

The experience of Kosovo and South Ossetia demonstrate that neither Russian nor Western imperialism can provide either economic security or the unity between different ethnic groups.

There undoubtedly exists a powerful mood of opposition to the new Kiev regime among Crimea's ethnic Russians.

But the referendum proposed by the pro-Russian Crimean government, backed by the force of Russian arms, will not take place in an atmosphere of genuinely free debate.

It will be forced through against the wishes of other ethnic groups in Crimea, like the 300,000 Tartars.

Working people across Ukraine and Russia have more in common than divides them. Poverty, unemployment, exploitation and currency devaluation affect all workers.

The ruling elites of both countries are prepared to use ethnic differences to turn workers away from a united struggle. Now it seems they are prepared to go to war to defend their interests.

It is necessary working people across Ukraine organise to oppose the economic and social attacks that are to come from the new government.

Such a struggle will only succeed if the working class is united against the oligarchs and their far-right friends now in the Kiev government.

A unified working class struggle also needs a mass party of working people, with a socialist and internationalist programme.

By taking into public hands the key sectors of the economy and the wealth of the oligarchs and top bureaucrats, working people across Ukraine can be guaranteed decent living standards, pensions, health care, education and housing, as part of a socialist, democratically planned economy.

The pro-western Rada's "democratic revolution" amounts to restoring the 2004 constitution so as to transfer some powers from the President to Parliament.

Socialists call for a constituent assembly to be convened, in which all sections of the working class are represented.

A workers' government can replace the rotten capitalist state with a society run in the interests of the working masses, gaining a powerful echo from workers across the region.