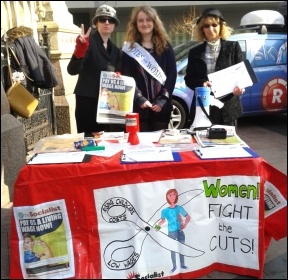 I am a single mother on a low wage, living in a village and relying on expensive public transport with no buses after 6pm or on Sundays.

So I understand some of the problems facing women affected by this government's onslaught of cuts, who want to get involved in the fightback but are hampered by their situation.

On International Women's Day Leicester Socialist party decided to hold a stall aimed at these women, campaigning for a £10 an hour minimum wage and free childcare - which struck a chord with many women and men.

A man walking past with a baby in a pushchair did a u-turn when he heard us talking about fully-funded childcare.

We sold 14 papers, raised some fighting fund and met four young people interested in getting involved in the Socialist Party.

Two women comrades who hadn't been involved in activity or meetings for a while came to help on the stall with their children and a new young member did her first stall and sold her first paper.

The atmosphere was light-hearted despite the seriousness of the issues; some of us dressed up in Victorian women's outfits and we played music through the megaphone.

Comments we heard on the stall included: "I agree with everything you're doing and I really want to help but I have two young children and I can't go out in the evenings." , "I want to get involved but I can't come to a meeting in a pub.", "I wouldn't usually come over to talk to you because politics is all about men and doesn't seem to have anything to do with my life."

Several women said they would try to come to our follow-up meeting on women fighting back against the cuts.

We have already decided to do a rota of Saturday stalls in three towns in the county, in addition to our Saturday stall in Leicester and our Friday stall outside the council offices.

As well as meaning the branch does activity in new areas, this will enable comrades who can't travel to take part. If women can't get to us, then we have to go to them!

The day after the stall I had discussions with and sold copies of the paper to four women in my village.

We are also considering restarting our Saturday discussion group for women and holding regular meetings and campaign stalls on issues particularly affecting women.

Stop the destruction of care in Britain

NHS - under attack from private vultures

Police spy inquiry must not be another whitewash

Preparing for a mighty upsurge in class struggle

Anti-fracking campaign steps up in Lancashire