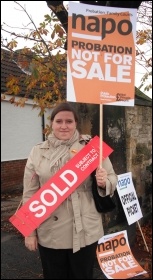 As we go to press, probation workers in Napo are preparing for a second national strike against privatisation from 31 March to 1 April.

Pressure is piling up on Secretary of State Chris Grayling from across the justice sector.

On 1 April, lawyers in the Justice Alliance will take protest action and join us in rallies across the country as part of their campaign against Legal Aid cuts.

At the same time prison officers in the POA, already at boiling point over staff cuts and pension changes, have been urged to support us and prepare for a coordinated response to Grayling's disastrous plans for resettlement prisons.

If further confirmation were needed of how out of touch Grayling is, it came with recent news that prisoners are now banned from receiving books sent in by relatives! This is because of new rules introduced to encourage compliance with a 'tougher' prison regime.

But it is yet another example of how Tory headline-grabbing measures will ultimately work against his declared aim of a 'rehabilitation revolution'.

Napo members have now been involved in a year-long battle against Transforming Rehabilitation (TR/privatisation) their determination in previous strikes has shown we can defeat this vicious Con-Dem government.

Living with the stress and anxiety of TR has not been easy but I say this: