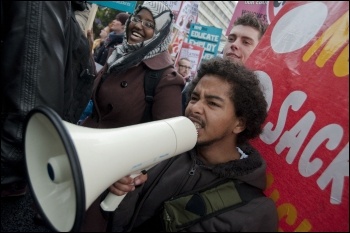 Students on the last NUS national demonstration on 12 November 2012 against the government attacks on university education, photo Paul Mattsson   (Click to enlarge)

Universities minister David Willetts has been forced to admit that student debt defaults are currently at about 45%.

He also estimates that once the figure reaches about 48.6%, then the money saved from the fee rises in 2010 is counterbalanced by unpaid loans.

This clearly exposes the myth that fee rises were about economic efficiency in austerity Britain. It shows the fundamental motive was a further marketisation of higher education.

It demonstrates that it was about trying to scrap any notion of education as a public good.

When the Con-Dems forced through the tripling of tuition fees to a maximum £9,000 a year, they were faced with demonstrations and occupations involving hundreds of thousands of students.

Supposedly the system was unaffordable and students were going to have to cough up more towards the cost of university.

But the vast majority of students still financed fees through student loans - which have always been paid back only when earning over a certain amount.

While the amount of debt went up, the amount of money coming in actually went down because this threshold was increased from £15,000 to £21,000 (undoubtedly a concession to the pressure of the movement against the fee rise).

After 30 years any remaining debt is written off - in fact the government always accounted for 30% of the loans never being repaid.

It is no surprise that estimates suggest today's students are likely to default on their debts. Coming out of university, students are faced with the grim reality of unemployment, zero-hour contracts and low pay.

Capitalism offers no hope for graduates and little chance of being able to pay their loans back. As all three main parties are committed to cuts and privatisations, this figure will no doubt keep on rising.

It is unlikely that this startling revelation will change the minds of the Coalition on the issue of fees however.

Universities can expect to have further cuts to their already dwindling budgets from central government.

There is a widening layer of university management that seems to think that un-capped fees are the solution.

There are those who think that lowering the level at which graduates begin to pay their loan back is the answer.

The crisis in higher education funding proves fees and loans are simply not working and need to be scrapped with the introduction of free education and living grants.

The potential sell-off of the Student Loan Book (SLB) is a further sign of what the government's motivation for all these changes is.

The sell-off will allow private debt firms to make a profit on student loans. The sale of the mortgage-style loans at the end of last year shows the trajectory the SLB is heading in. These loans, dating from 1990 to 1998 have very low repayment rates, of around 14%.

Although that loan book was worth nearly £900 million, it was sold off for a meagre £160 million. The debt firm will be looking to make a mark-up on this and the government is clearly using private enterprise to re-structure loan repayments while turning the blame away from themselves.