Link to this page: https://www.socialistparty.org.uk/articles/18377 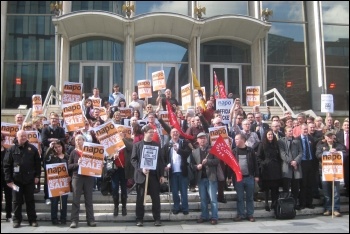 NAPO strikers together with barristers who joined their strike rally in Manchester, and others. 1.4.14, photo by H Caffrey   (Click to enlarge) 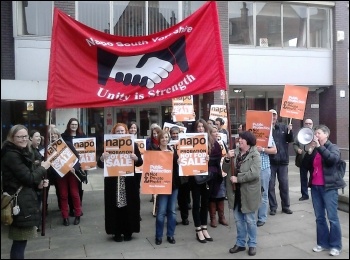 As 30 probation officers walked out of Peel House, Sheffield, just after midday, one told me: "We're striking to be unattractive!"

What she meant was: "If private companies see that we're a militant workforce then they won't want to tender for our service".

She said that they had just had an email saying they could stay in the local government pension scheme, which on top of the Framework Agreement giving most staff seven years' protection of service continuity, means that this privatisation is becoming increasingly unattractive to the private vultures and can still be stopped. This is despite the government spending £9 million and employing 200 civil servants on trying to make it work. But as one speaker said: "They're just making it up on the hoof."

After marching to the town hall, Napo members were joined by solicitors and lawyers taking two days of industrial action against the cuts in legal aid. As their speaker Tim, a solicitor, said: "It's about access to justice, these cuts are going to mean only the rich will get the best legal representation and the poor will get what's left from G4S or Serco!". 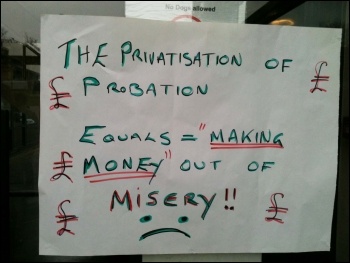 Poster at a Napo picket in London, photo by Ian Pattison   (Click to enlarge)

"Too right we need a general strike!" was the catchphrase on the probation officers' picket outside Birmingham Crown Courts as Socialist Party members went to offer support. With over 20 workers there, the mood was combative and upbeat, not least because of the coffee shop across the road donating free drinks! 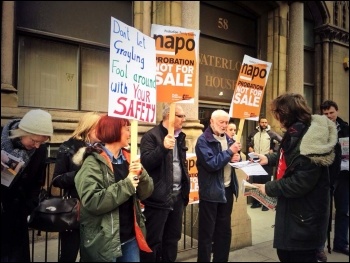 Leeds Socialist Party members visited picket lines at the magistrate courts and Waterloo House in Leeds in support of probation workers taking part in a 36-hour strike over privatisation of the probation service.

Pickets explained to us their anger at this reckless action, which with spiralling costs effectively means that taxpayers’ money will be going to subsidise private companies taking over a public service that those currently delivering it are perfectly capable of.

£9 million has already been spent in consultancy fees alone! One former Napo member who had been retired for 20 years came out to join pickets at Waterloo House.

At the magistrate courts, the listings had been much reduced in anticipation of the disruption the strike was causing. Pickets there leafleted those going into the courts and those passing by, determined to spread the message about the destruction that justice minister Chris Grayling is wreaking on their service.

Tomorrow, strikers will be leafleting in the city centre where other local trade unionists are making plans to join them.

This version of this article was first posted on the Socialist Party website on 31 March 2014 and may vary slightly from the version subsequently printed in The Socialist.