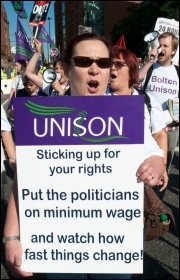 Unison health conference has overwhelmingly passed a resolution from the Service Group Executive calling for a strike ballot over pay. The government's pay freeze has meant that 60% of NHS workers will get no pay rise this year, including 70% of nurses.

There was a real mood to fight within the conference. In one particularly emotional speech, a Scottish member said through tears that he was getting phone calls from his daughter saying there's no food in the house. She'd also spotted emails from Wonga and she'd asked him why he was using Wonga: "Aren't Wonga a bad company?"

He asked: What do you tell your daughter when you're so low paid you can't afford to feed the family?

The union hasn't named a date for when the ballot will begin but they are looking at organising a long campaign among the membership. To kick-start the campaign there will be a national day of protest on 5 June across the NHS. This will include lunchtime demos and protests.

Five Socialist Party members spoke in favour of action. Gary Freeman, chair of South Derbyshire Healthcare branch said there should be the widest possible coordination with other unions: "Let's get back what we've lost over two years".

Roger Davey from Wiltshire and Avon said: "The credibility of our trade union is at stake. We have no option but to fight. We're facing a global capitalist crisis and years of austerity and stagnation unless we fight. What will our pay packets look like in ten years if we do not fight?

"There's no future without a struggle. We should seek the widest coordination with other unions and sustained action. We can defeat the government and austerity. That can give hope, not just to our members but to millions of workers in this country."

In a forceful speech, Alan Manley from Tayside insisted: "We must not repeat the mistakes of the pensions' dispute. I don't want to be marched up the hill and marched back down again having lost a day's pay".

Help TUSC offer a no-cuts alternative on 22 May

More cuts and another resignation in Southampton

Profit vultures out of NHS

40 years of the Committee for a Workers' International

Gains for left on NUT executive

Let down by Welsh Labour

RMT: Put the tube strike back on and escalate

NUS conference: sip tea or put up a serious fight?

Hard loads - and a fightback - on the bins