Link to this page: https://www.socialistparty.org.uk/articles/18556 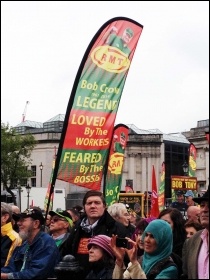 RMT turns out in strength for May Day march in London

The ranks of the RMT swelled the number of marchers this year, keen to pay tribute to Bob Crow, bringing RMT banners from the length and breadth of the country. 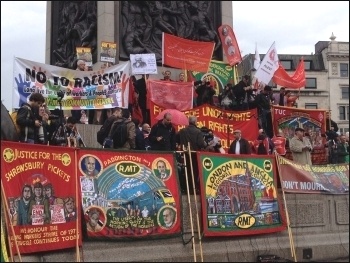 At the rally in Trafalgar Square, in an especially dedicated 'first half', videos were shown that highlighted the role played in the labour movement over decades by Bob Crow and Tony Benn. Among the first speakers to make moving tributes to these two left figureheads, were RMT president Peter Pinkney, Jeremy Corbyn MP and Bob Crow's daughter Natasha Hoarau.
Natasha announced that she is standing on the London No2EU list of candidates in the European elections on 22 May, the list that her father would have been the leading candidate on. 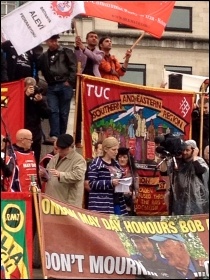 TUC general secretary Frances O'Grady spoke of "honouring two great heroes of the labour movement" and said that if all trade unions across the movement built their unions like Bob Crow built the RMT, the unions would collectively have 10 million members instead of their present 6 million. She gave TUC backing to the present RMT London Underground strikes, saying: "If striking is the only way to win, that's what we must do".

Len McCluskey, the leader of the UK's largest union, Unite, also gave the support of his union to the RMT struggle. Referring to the millions of workers celebrating May Day around the world he said "our class is out today" and emphasised that British workers have much more in common with workers across the globe than they do with any British boss. 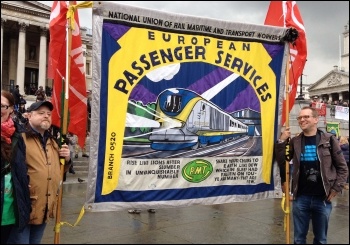 One of the many RMT banners in Trafalgar Square, 1.5.14, photo by J Beishon   (Click to enlarge)

Peter Pinkney and Len McCluskey had raised the need for a general strike in Britain when they spoke in the first half of the rally and PCS assistant secretary Chris Baugh stressed the need for one when he later addressed the rally: "We need to prepare the ground for the general strike that's needed in the UK - when the trade union movement begins to show its latent power".
The best tribute to Bob Crow and Tony Benn is to continue to support the struggles they were involved in, he remarked, on pay, jobs, pensions etc. 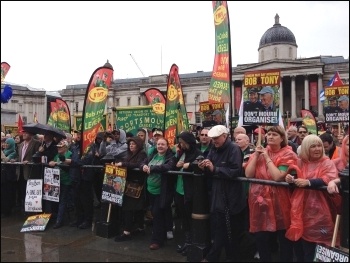 John Hendy QC gave a forceful tribute to Bob Crow, describing him as "a tireless man who led by example, every evening and every weekend speaking in favour of every conceivable campaign that might advance the cause of the working class here and around the world". He added: "Let's not forget the message of Bob Crow, that capitalism is a rotten, evil system that's rendered hundreds of millions of people into indignity, poverty and injustice worldwide. Socialism was the message that Bob Crow delivered at meetings up and down the country".

Unfortunately the rain was getting the better of the audience as the rally went on (with many speakers, interspersed with music performances), so fewer people were present to listen to the last few speakers.

Among the final contributors was Oktay Cimpolat from the Day-Mer Turkish and Kurdish organisation, who also expressed solidarity with the tube strikers and paid respect to Bob Crow and Tony Benn. He drew attention to the need to support workers around the world who have been banned from celebrating May Day in central squares like Taksim Square in Istanbul.

He ended by voicing strong opposition to austerity attacks in Britain and called for a new workers' party to be built by the trade unions, to serve the interests of the working class. 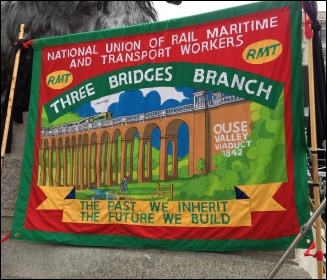 Oktay is one of over 560 candidates nationally standing as anti-austerity TUSC candidates in the local elections on 22nd May. Many RMT members on the May Day demonstration expressed enthusiasm for TUSC when they came across TUSC leaflets being distributed - a reflection of the support their union as a whole gives to TUSC and of the fact that over 50 RMT members are standing as TUSC candidates in the local elections.

Fire Brigades Union general secretary Matt Wrack drew attention to the imminent strike action in defence of pensions that his union is taking on each of three days from 2nd May. Referring to threats by the employer he said: "We've been told they won't negotiate because we're taking strike action, but we won't be bullied and intimidated by a bunch of public school boys in Westminster". 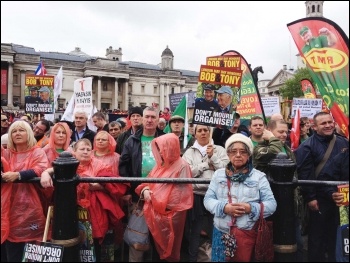 The last but not least speaker of the rally was Paul Kershaw from Unite's housing workers' branch in London. He explained why Unite members in his branch were wearing "I am Brian" t-shirts; they were supporting Unite rep Brian Kennedy who has been suspended from work on trumped-up charges.

"An injury for one is an injury for all", Paul ended, echoing the spirit and solidarity of May Day.

This version of this article was first posted on the Socialist Party website on 2 May 2014 and may vary slightly from the version subsequently printed in The Socialist.