Now build a mass voice for the working class 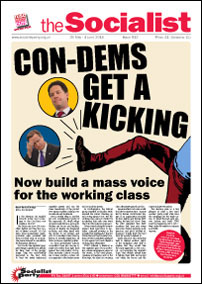 In the elections for English councils voters sent a message to the Con-Dem cuts coalition. Get out!

The Tories are now 230 councillors lighter and they lost control of eleven councils. 310 Lib Dem local government representatives were unseated and they now lead only six councils. They were reduced to one MEP in the European elections.

For months the capitalist press gave Farage a platform to peddle his false 'man of the people' image. Ukip was undoubtedly presented as the best stick to beat the hated traditional capitalist parties and was the main beneficiary of the protest vote against parties making cuts at national and local level.

But in reality Ukip is another pro-cuts establishment party of the super-rich 1%, which whips up racism and division. Among its backers are bosses and bankers, among its leaders are disgraced ex-Tories, and when faced with the choice to cut services and jobs its councillors have voted in favour. It actually represents all that is rotten in capitalist politics.

In local government Labour councillors have also chosen to make cuts rather than fight back against the cold cruelty of Con-Dem austerity. Labour councils are issuing eviction notices for non-payment of the bedroom tax and council tax arrears.

In Southampton, the Labour group expelled Councillor Keith Morrell. His crime? Standing up and voting against cuts. But the working class gave its verdict by re-electing him with over twice the vote of his Labour opponent.

Voters were looking for a way to express their opposition to austerity - planned poverty, as the Socialist has explained it. The 561 Trade Unionist and Socialist Coalition (TUSC) candidates pledged to vote against cuts and offered a working class alternative.

TUSC suffered a blackout in the capitalist press but nonetheless, where campaigners were out the streets, in the work places, speaking at meetings and on the doorsteps, the idea of a working class alternative gained an echo.

We were able to ask: who would you like to represent you - a party led by former stock-broker Farage or an organisation founded by class fighter and former RMT leader, the late Bob Crow? Even the BBC admitted that RMT members had "pay rises every year even during austerity, good pensions and good holiday allowances". Surely that's the best basis for a party to defend us.

Trade unionists who every day fight to defend workers' rights in the workplace were able to explain that they would take the same approach in the council - not accepting the capitalist 'logic' that workers always have to tighten their belts and accept cuts while the bosses and the super-rich get ever richer.

This election gave us a tiny glimpse of what a new mass workers' party could offer. Now the campaign for the trade unions to break the link with pro-cuts Labour and build TUSC must be stepped up. No to cuts!