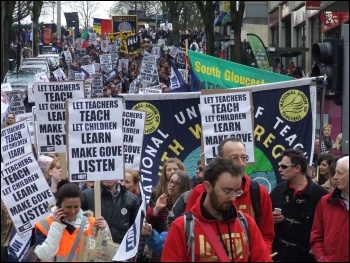 The NUT's executive committee has voted to make preparations to give notice for strike action on 10 July. This is the day that school support staff unions have put forward for when they hope to be able to call a coordinated strike.

Other public sector unions like the PCS have live ballots already in place and are also discussing the possibility of coordinating action too.

There will also be other campaigning activity including campaign stalls, Education Question Time events, a Lobby of Parliament on 10 June and the People's Assembly national demonstration on 21 June.

There will be consultation with local officers and members on patterns of further strike action in the autumn term, including surveys of reps and random samples of members to be conducted after 10 July.

Reassurances were given that the June Executive meeting could discuss the draft content of any members' survey before it was issued (as well as getting an update on talks with government and news from other unions).

Importantly, it was recommended by officers that the survey results be reported to the July National Executive - in time to make sure we could - if agreed - make plans for further action earlier in the autumn term, perhaps alongside other unions too.

Of course, at the same time another 'survey' of members will be taking place - the election for NUT General Secretary. I have consistently argued for the union to announce a calendar of ongoing strike action, mobilising members around a clear set of campaign demands. I believe that the support for that demand will be reflected in support for my candidature in June's general secretary election.