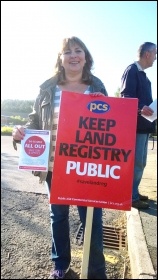 On 14 and 15 May, PCS members working in Land Registry (LR) responded overwhelmingly to a call for strike action.

The action had been called as a result of the failure of LR management to give the union assurances about privatisation, no compulsory redundancies and retaining a presence in each of the current locations.

The action was also called against the background of a damaging article in the Guardian newspaper, which showed that despite public assurances given by Tory minister Michael Fallon MP that no decision had been made about LR privatisation, detailed plans had been made to move the trusted and efficient public service into the private sector.

This led to significant support for the strike from customers and even a former chief Land Registrar who understand that the dispute is not only about defending jobs but is also about defending a public service.

In the build up to the strike, local PCS branches set up campaign committees involving not only existing activists but also members, many of whom had never been involved in union activity before.

On the strike days this was further borne out by the numbers on the picket lines, where in many cases dozens of members came along to show active support for their union. At the Birkenhead picket line there were 30-plus members making a stand, but the picket line also received a visit from a delegation of Swedish trade unionists who were in the region and wanted to show some international solidarity for our dispute.

The week following the strike, delegates met in Brighton for PCS conference and the Land Registry dispute was one of the hot topics of discussion.

In the coming weeks PCS will continue to push for the assurances that our members require and we will be making it quite clear to both management and the government that if they are not prepared to meet our reasonable demands that the action on 14 and 15 May was just the start.